A History of Measuring

The word tailor comes from the French “tailleur”, which roughly translates to “one who cuts material”. While today we think of tailors as people who sew, the skilled trade of tailoring is actually in the measuring, drafting, and cutting of garments. Sewing is important, of course, but as addressed in this post, the effect of a finished garment is largely determined by the cut rather than the assembly. (The opposite holds true in traditional Japanese clothing, but even a kimono requires certain body measurements to ensure that the panels are the right length.) One cannot cut without first measuring. 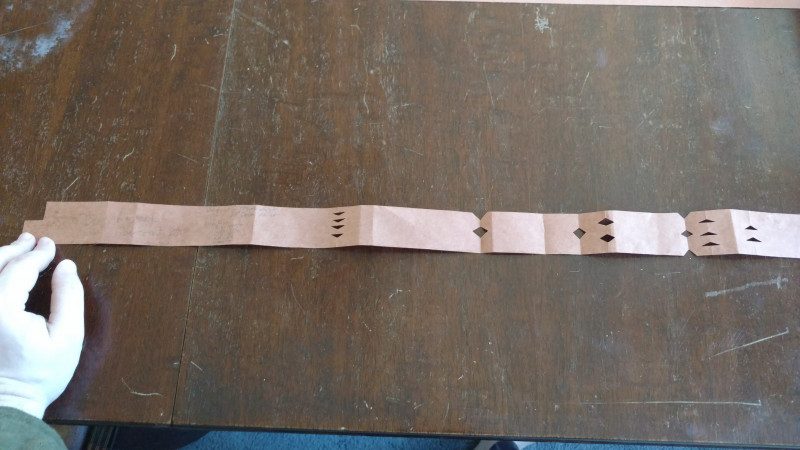 A tape measure, circa 1760s. (Modern reproduction.) The notches indicate different body measurements of a particular customer, whose name would be marked on the end of the tape. Once you learned the notch code, you didn’t need to be literate in order to draft a pattern.

The earliest measuring tapes used for sewing were a paper strip, like the one above. This strip would be labelled with the customer’s name, and a notch cut in one end to denote where the measurements would begin. The tailor then would “take their measure”, marking out each dimension on the paper tape with a code of different shaped notches. These were not standardized, and different tailors would have their own codes. For efficiency, the circumferences would be taken as half measures– instead of taking the full circumference of the chest for instance, the measurement would be from sternum to spine at the widest part of the chest. The notch codes meant that one did not have to be able to read and write in order to use a paper tape, so long as you were handed the correct one. The patterns were drafted by laying the tape on paper or cheap cloth and marking through the notches, folding the tape into the right proportions for the back width versus the front width. Patterns could be reused for different customers of similar size, with slight adjustments. For measuring fabric, a stick marked in fractions of a yard would be used.

The first measuring tapes as we know them– a long strip of cloth or paper marked in inches or centimeters– come into general use around the 1820s. They were considered revolutionary at the time as they enabled tailors to calculate the proportions between different body measurements, and allowed for the development of drafting systems like the basic shirt. While before, all fashion had hinged on colour, pattern, and trim, the 19th century saw menswear (and masculine-styled womenswear) become preoccupied with cut. As the century progressed and transitioned into the 20th century, colour and pattern increasingly disappeared altogether, leaving cut as the defining feature. With such an emphasis on the use of modern technology, some tailors published their drafting systems under grandiose titles such as The Grand Edition of Supreme System for Producing Mens Garments (yes, this is a real book). By using mathematical principals, 19th century tailors sought to raise a commonly denigrated trade to the level of a science. 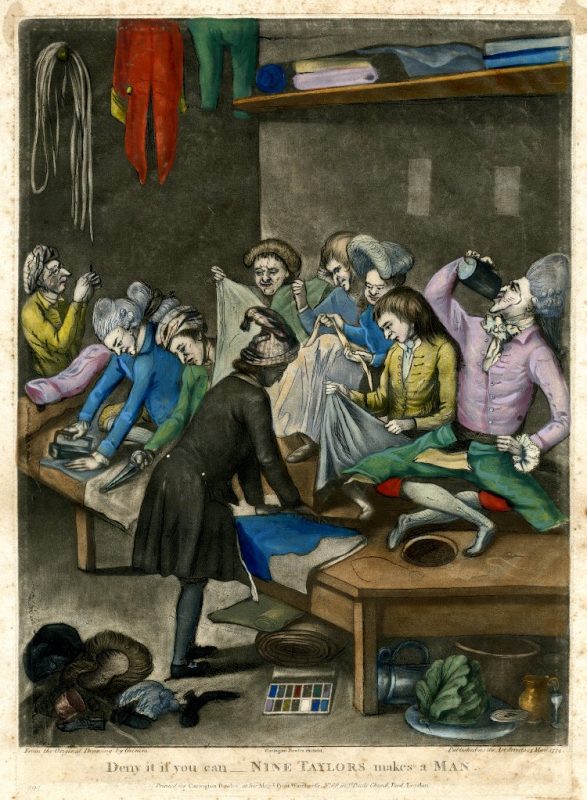 Tailoring was not well-thought of before the 19th century. A tailor’s account-book from the 1780s gives the price of having a coat made up as about 10 shillings, equivalent to $90 in 2018 US dollars. A coat would take over 40 hours of work, and may have been worked on by anywhere from one to several tailors making an average of $2.25 per hour. The 1774 print above by Carrington Bowles jokes that it took nine tailors to make one man– referring both to the work-hours needed to make a suit, and to tailors’ status as something sub-human and unmanly, as illustrated by their slovenly appearance. Sitting crosslegged on a table necessitates taking off one’s shoes and unbuckling the knees of one’s breeches, and fashionable wigs have been allowed to go askew. Depictions of tailors from this period often show them poorly clothed and ill-groomed due to their low pay and long work-hours. It would have been difficult to find time to sew for themselves when their livelihood depended on sewing for other people.

Before the Industrial Revolution and the mechanization of textile and clothing production, sewing was barely considered a skill. Basic sewing was learned at home or at school by boys and girls alike, and while plenty of people may not have been particularly good at it, they still could do basic repairs. However, even those who could sew well might leave the cutting to a professional– an 18th century court record describes two women bringing several yards of printed cotton they had stolen to a dress-maker to have her cut garments for them, which they then sewed themselves. Her payment was a share of the cloth, reimbursing her less for her time, and more for her expertise at measuring and an assumption that by sharing in the goods, she’d be unlikely to betray them.

The sewing machine sped up garment construction by order of multitudes, and now there are machines that can cut fabric to a preset pattern and layout. Even pattern drafting can be done by computer, to some extent. Much of garment production has become less about skilled handwork and more about the use and maintenance of more efficient machines (which are also skills, albeit different ones), but we have yet to find an improvement on accurate body measurements taken with a tape measure.

Enjoyed it.
Thank you

Mood really gives back! This essay is so rich in facts and atmosphere. Paul White and Mood, thank you. I have been searching the web for information on what I understand (from an old apparel production xerox) were standardized tape measures made by the Mast company?? Did not find but this was fascinating background.

This is fascinating! I am doing a production of the Tailor of Glloucester and stumbled across this when Googling 19th C tape measures! Thank you.

The Tailor of Gloucester is one of my favourite Beatrix Potter stories! Though she wrote and illustrated it in 1901, the first lines refer to gentlemen wearing periwigs, swords, ruffles, and lace, so it is meant to be set in either the late 17th or early-to-mid 18th century. He likely would have been using paper measures for each customer like I described here rather than one marked in inches.

This is such a useful article but I have one question: can you tell me more about how the personal measure would have been used? Or possibly let me know who re-created the one in your illustration? I am just starting as a C18th re-enactor and I am researching what sort of thing I would have had in my pockets in 1740-1760ish. I have been fascinated by the concept of a personal yard or personal measure for ages but I’m finding it very difficult to find any information. Many thanks!

How to Alter a Pattern to Shorten/Lengthen...

How Does a Sewing Machine Operate?

Top 5 Fabrics for Your Fall Wardrobe

Fashion Draping – From Idea to Reality

All About Pant Alterations

Everything You Need to Know About Jersey...

Tips & Tricks for Sewing with Knit...