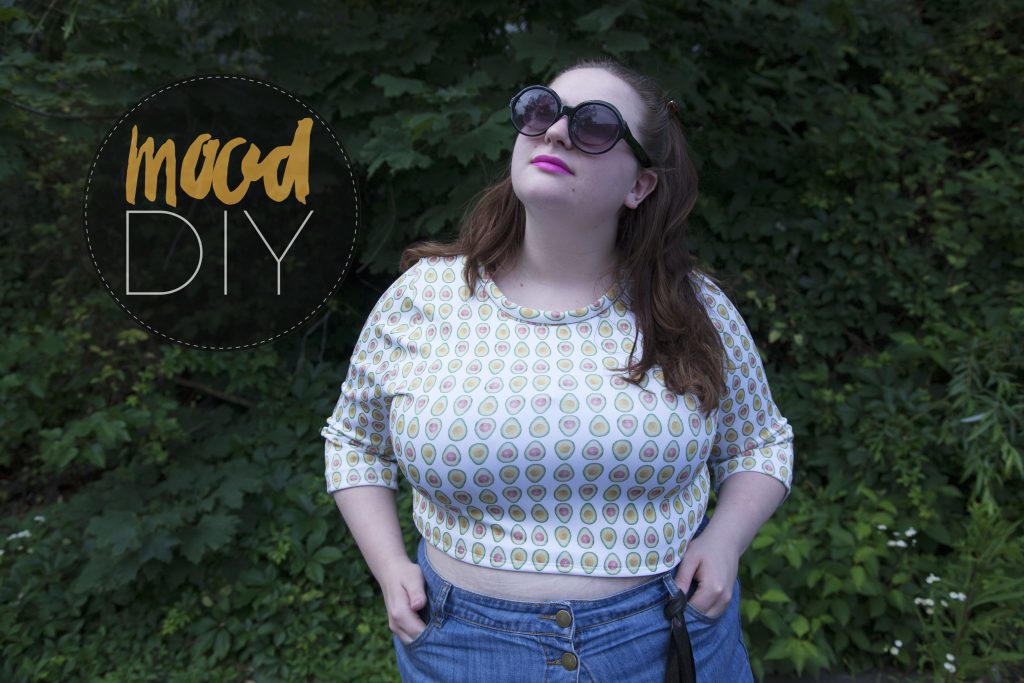 What is summer all about? The beach, having fun with friends, and healthy fats, of course! Which is exactly why this avocado printed neoprene crop top completes the perfect summer ensemble. I love this print, and even though I’ve read all about the difficulties of sewing with neoprene, I decided an avocado crop top is worth the hardship. To tell you the truth, it wasn’t as bad as I thought it would be, so novice sewers who are up for a challenge will definitely be prepared to tackle this tutorial. 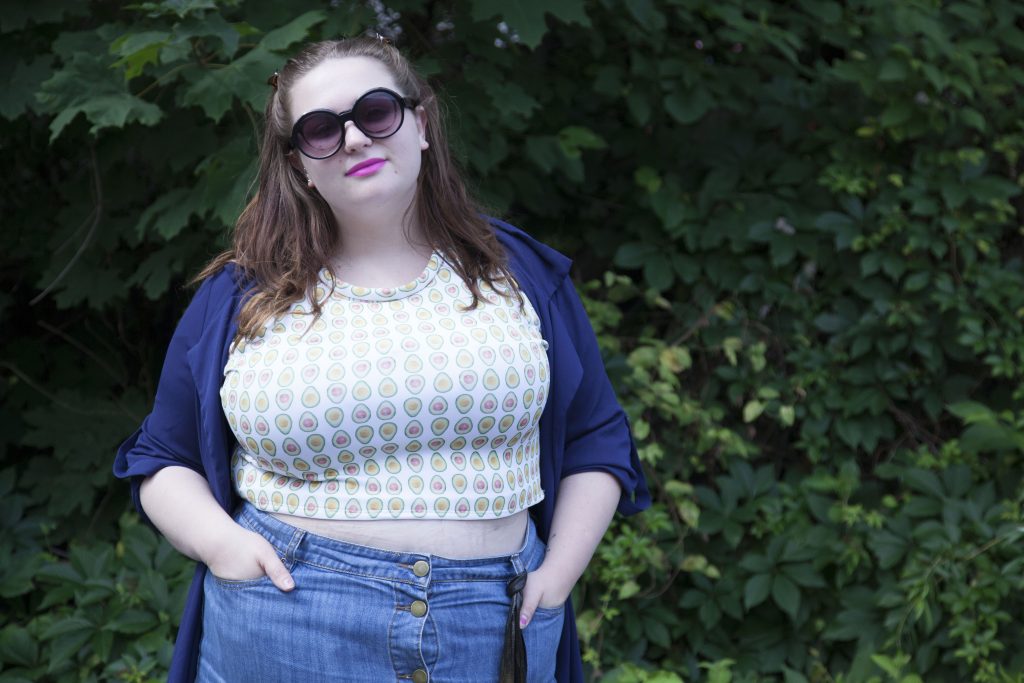 Who says plus size girls can’t rock the crop top?

I used a zipper stitch for this piece so the thread would stretch with the neoprene. I also used a slip stitch for the collar, so before getting into this DIY, you might want to familiarize yourself with that. The slip stitch is detailed here. 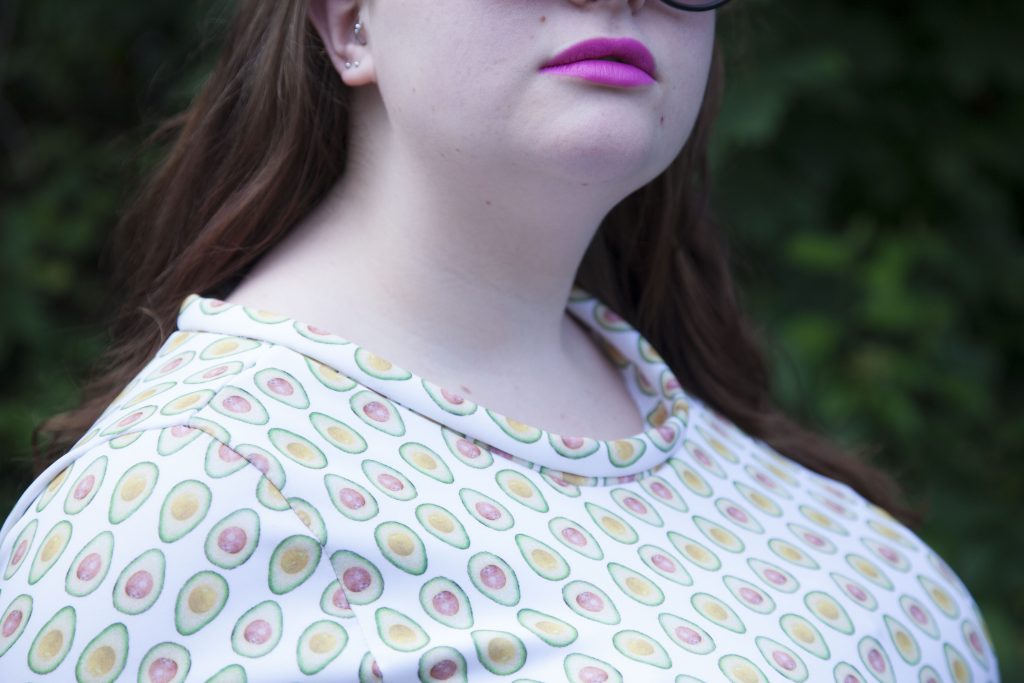 My first step was to trace a crop top I already had. I traced the back without the arms, and then the front without the arms. The front and back are virtually the same, but the back has a higher neck. I traced them out on the same piece of pattern paper, and traced both collars. Then, I cut out the back, and cut to where the collar would be on the pattern paper for the front, and cut the front fabric out. You can cut both pieces out on the pattern paper separately if you’d like, but this way conserves paper. I only traced one arm, since they need to be the same size anyway. Trace the arm onto the fabric on the fold, so the arm is doubled in size.  I made sure to leave an extra inch for seam allowances, but if you want a tighter fit you can trace it exactly. You could also measure your bust if you don’t have a crop top to trace. Once everything is cut out, you should have four pieces; two arms, a back, and a front. 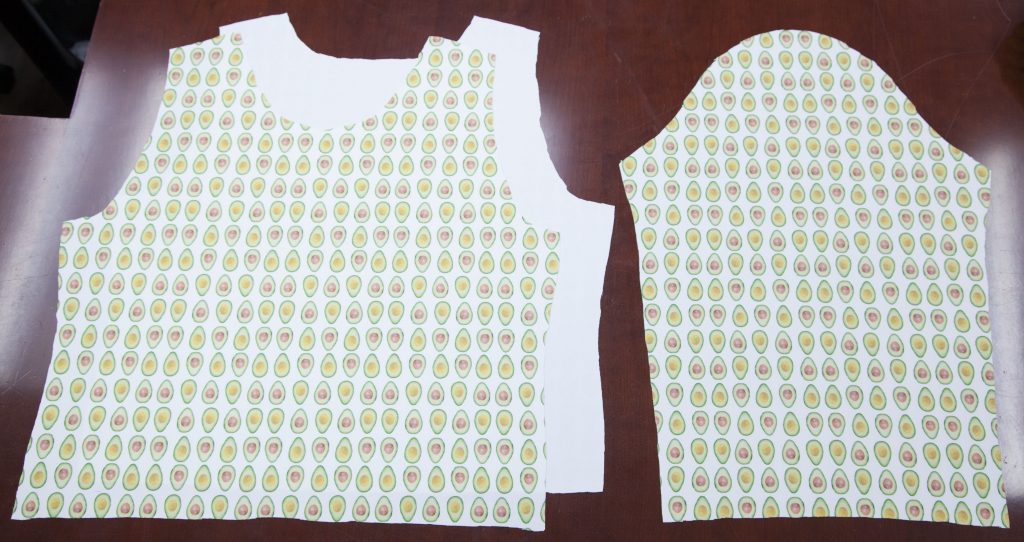 Pieces of the garment

With the faces together, I hemmed the shoulders of the front and back. There’s no need to use a french seam, since neoprene won’t pull, and french seams tend to get bulky with neoprene. Next, I sewed the arms on. Since they’re opposite curves, you need to maneuver the pieces to fit together, but try not to stretch the fabric to get it to fit. Don’t yet sew the arms closed, simply sew the opposite curves together for now. 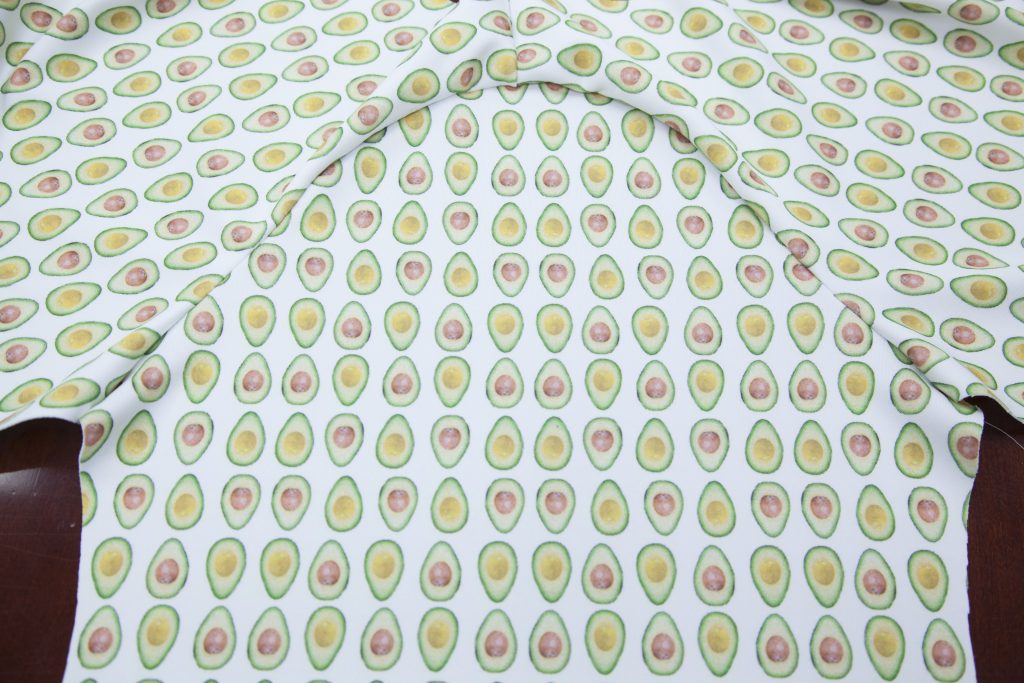 Once the arms were sewn on, I hemmed the side and closed the arms. This can be done in one long seam for each side, simply line everything up and pin them together, and then hem the shirt inside out. This is where the top finally looks like a top. I put the shirt on and picked where I wanted the sleeves to end. I originally was going to go with full sleeves, but once I folded them up I was sold on the 3/4 sleeve. The best part about working with this fabric is that everything can be measured by avocados. I left about two extra avocados from where I wanted the sleeves to end, and then double folded up the avocados so I could hem the sleeves. I used the same tactic for the bottom hem, again leaving two avocados to be folded up.

The last part is to add a collar to the neckline. Take some of the extra fabric, I used a piece that was 28″ by 3.5″, but you’ll need to measure the neckline of your own top to find the appropriate size. I folded that piece in half, the right sides touching, and then sewed it together at the top. 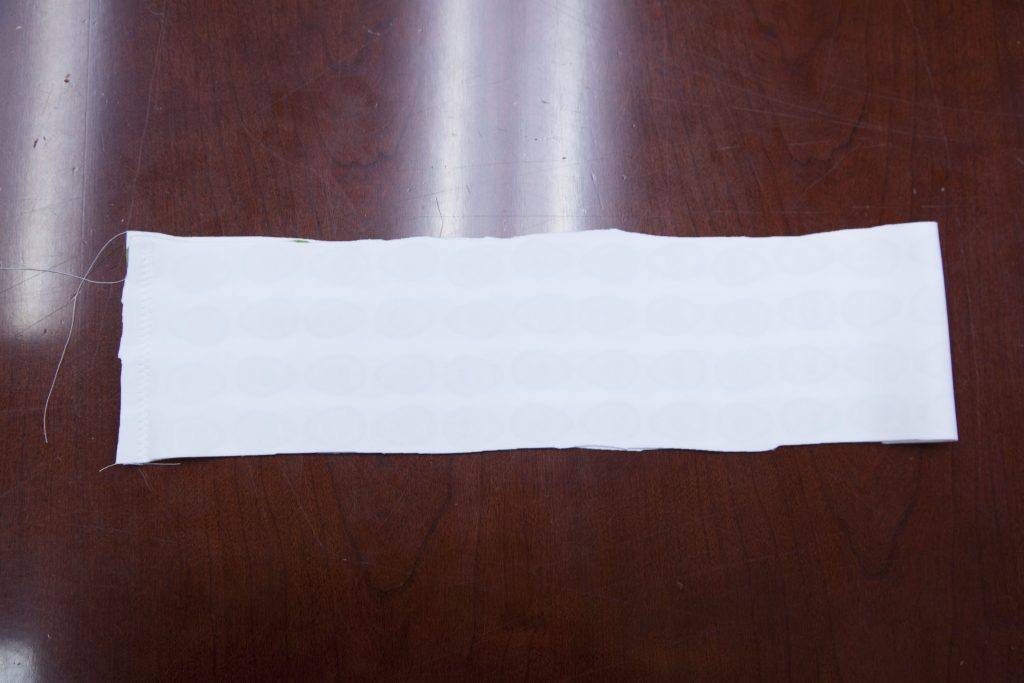 I took this odd little loop, flipped it right side out, and then lined it up with the neckline of top. Like the arms, you’ll have to maneuver the fabric to line up together, and you may even have to stretch the fabric a little to make sure it doesn’t bunch up. The collar will stick straight up once it’s sewn in, so I folded it down towards the outside of the shirt, and slip stitched it down so the stitch wouldn’t show on the outside of the fabric. 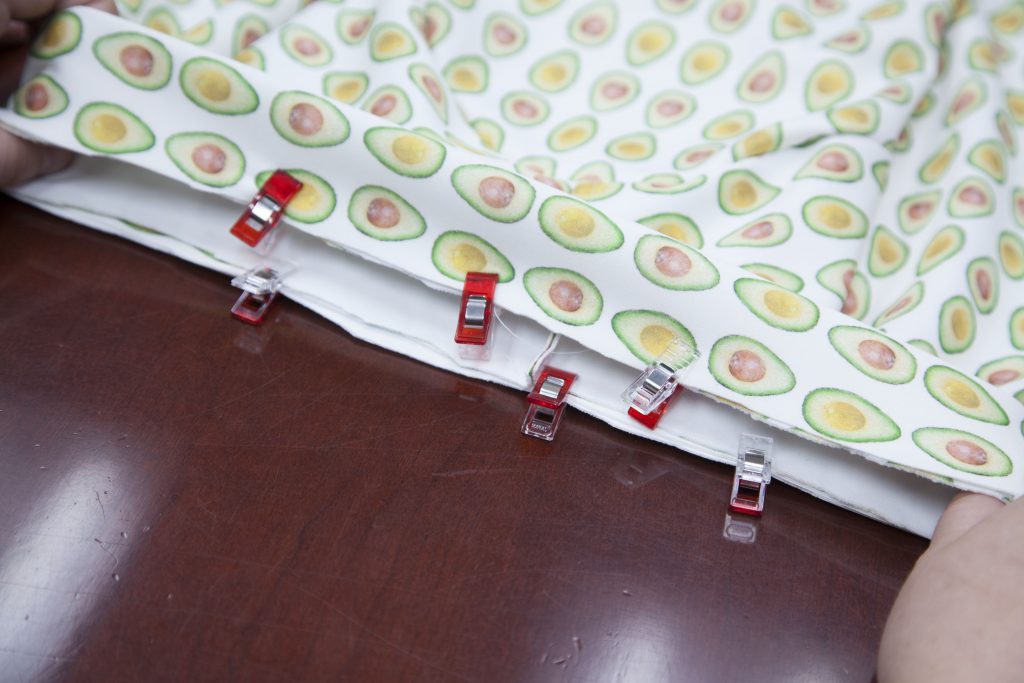 There you have it! This fabric is great because it can also be used as a swim suit, so this shirt can quickly go from casual and cute summer ensemble to beach ready with just a change of scenery. Mood has a variety of neoprene to pick from, and I’d love to see what others can come up with. 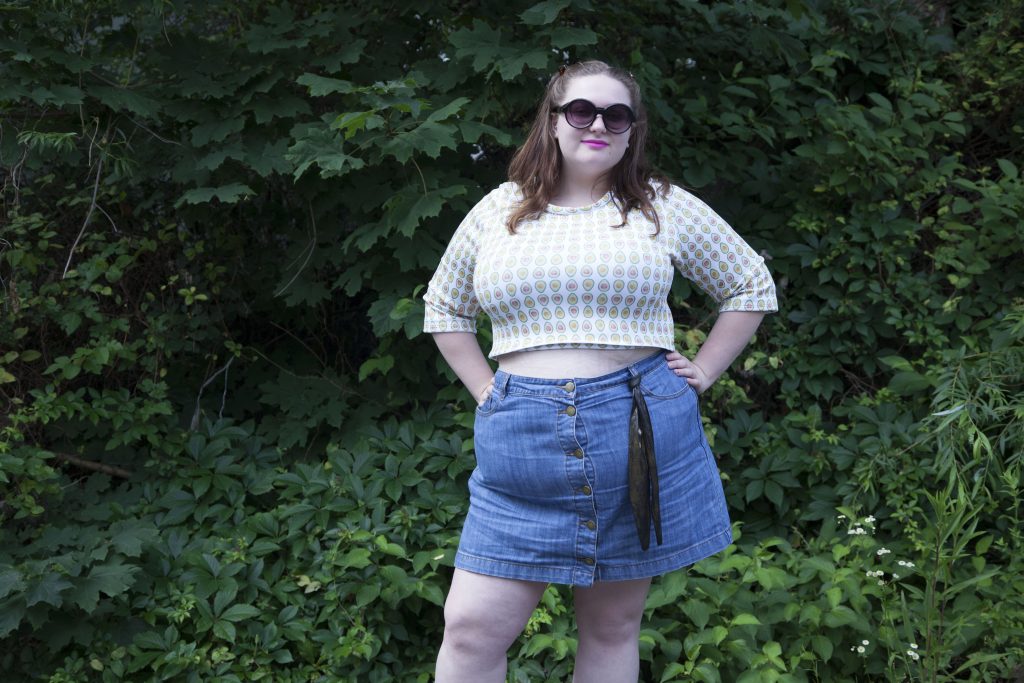 Rock out with my Guac out

I’m sure you want to hear all about my mess ups, but their weren’t many, that’s how simple this top is! I am notorious for sewing too far away from the edge of the fabric, I get very nervous I’m going to hem too close and then ruin the shirt. I had to re-sew the left arm after I had made the hem too big and lost about two inches in the fabric. 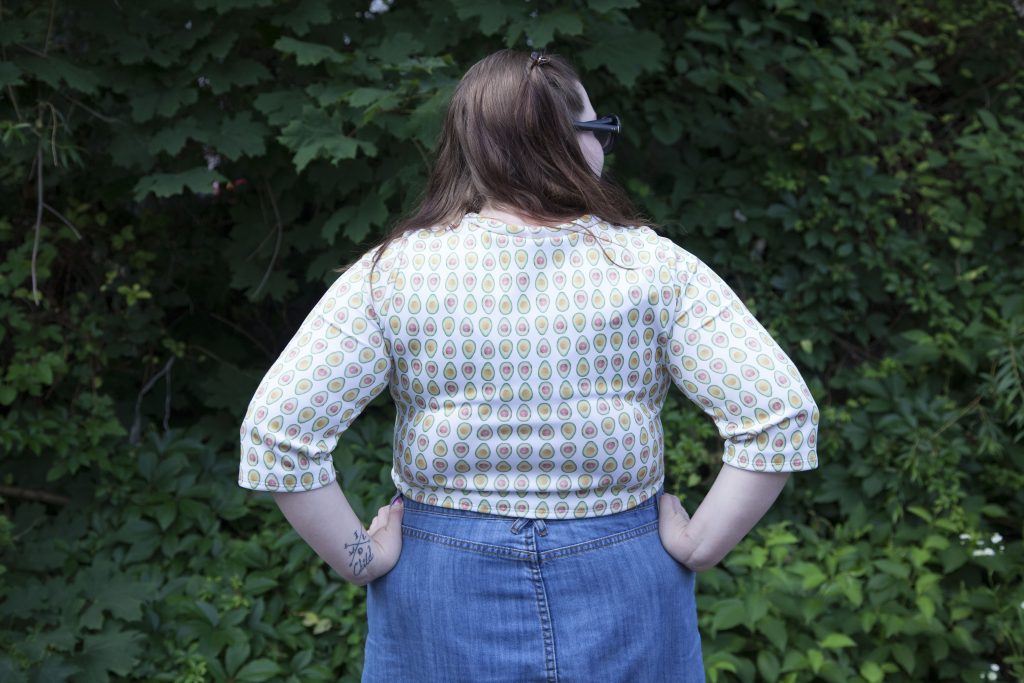 Backing that Hass up

I also did not originally plan to sew the collar down, either. Once I had sewn is on, though, I realized that I looked a little silly and had to sew it down. I was nervous I had ruined it, but thankfully it was a quick fix! 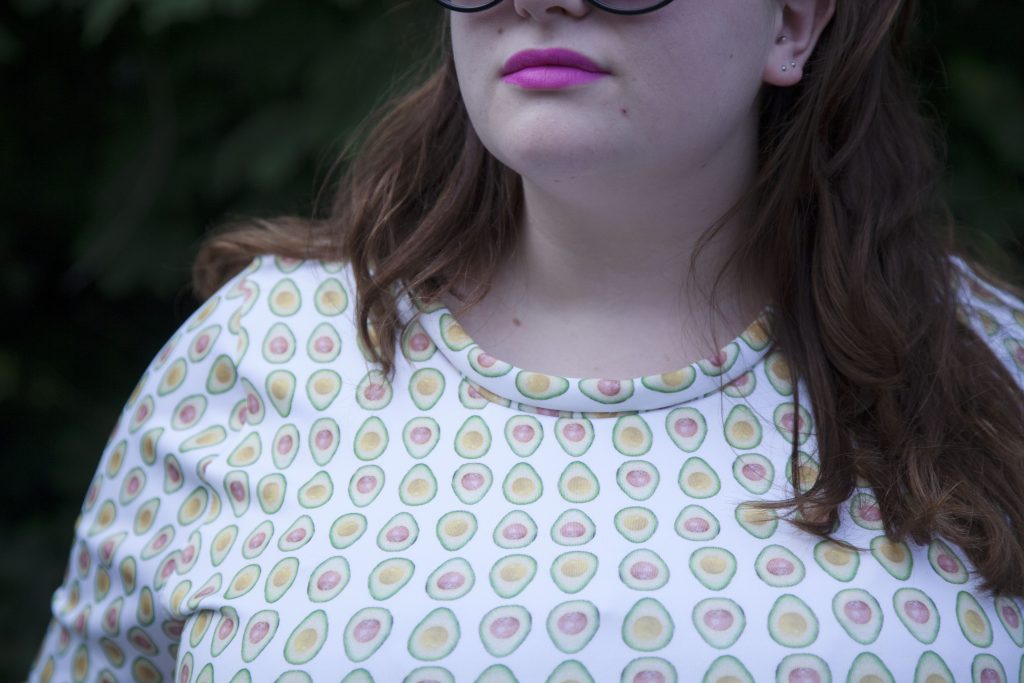 If you’re loving my look as much I am, you should check out Mood’s selection of denim and make your own denim skirt!

What would you do differently? What kind of patterns would you like to see this shirt in? Let me know in the comments!

Sweet. Love the collar that adds a 3-d effect

Thank you! It was a last minute addition, but it really made the top!

How to Manipulate Bodice Darts on a...