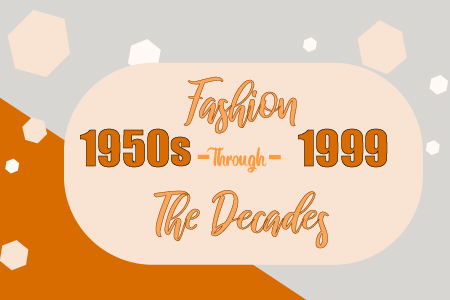 In the first half of the 20th century, two world wars and the Depression had wreaked havoc on the globe. But, the latter half of the forties brought about a whole new style from Dior. The “New Look” is commonly associated with housewife styles, and brought around a totally new era in fashion. These new silhouettes and styles laid the groundwork for fashion in the coming decades, and are still emulated today. In addition, recent textile inventions in the first half of the century led to the use of fabrics like nylon, elastane, and polyester, meaning fashion was within reach of all socioeconomic classes. Let’s take a look at the stylings of the second half of the 20th century.

The “New Look” was further fleshed out in the fifties, and with it came the “corselet.” The corselet utilized softer, elastic boning covered by jacquard in an effort to make the waist slim and the hips bigger. The “New Look” also helped to introduce the poodle skirt, a popular garment of the era. Poodle skirts were full circle skirts made of felt with little appliques sewn to the skirt. Many featured poodles, but they could feature anything from snowflakes to rocket ships and microphones. As the world recovered from war, western fashion went global and boomed in the East. Traditional garb was paired with more modern styles, turbans were worn with skirt suits and the mandarin collar cropped up on suit coats.

Elizabeth II became Queen, and the first scheduled flight by a commercial jet took off in 1952. The space age started in the mid-fifties, as Sputnik 1 was launched in 1957. This brought about looser, less fitted clothing like the t-shirt dress and the trapeze dress. Chanel made a comeback in this era, popularizing the Chanel Suit, typically in tweed, which featured a braid-trimmed cardigan style jacket paired with an A-line skirt. Balenciaga also made their way to the height of fashion, with clothes that let go of their seams. Chemise dresses, sheath dresses, and a princess-style dress called a skimmer, all became wardrobe staples. No outfit was complete without gloves, and scarves were utilized as belts and headbands.

Manmade textiles were on the rise, with rayon, acetate, and nylon at the forefront of garments. Poly-cotton blends and acrylic were also popular, while wool and cashmere were utilized for sweaters. This was also the baby boom, and Lucille Ball became the first woman to show her pregnancy on television, bringing attention to maternity wear. Pregnant women wore narrow skirts, loose tops, and a lot of stretch paneling. Despite the newfound market of pregnant and stylish women, pregnant styles were still modeled by non-pregnant models. With the baby boom came an influx of American citizens, all hitting their teenage years in the decades to come. 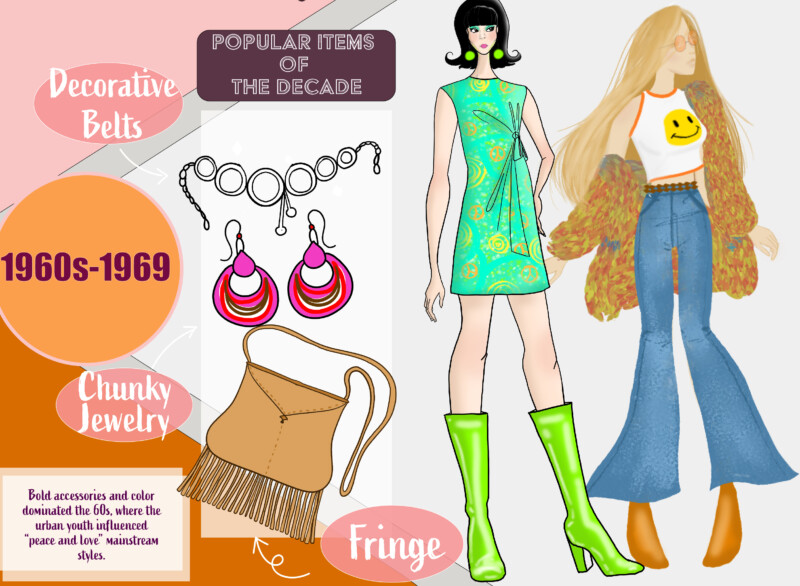 The sixties were the first period where fashion was influenced by urban youth culture, as go-go boots, miniskirts, and PVC became the height of haute couture. This is, in part, due to the baby boom from the late forties and early fifties, as young Americans reached their teens and became a major market for fashion houses. Audrey Hepburn and Jackie O also brought about the ladylike styles that featured pearls, pillbox hats, and capris. Audrey Hepburn was often seen sporting Givenchy, and they had a tender friendship that made both of them legends of fashion. Breakfast at Tiffany’s is still regarded as an iconic moment in fashion, and it’s Givenchy’s little black dress that Holly Golightly sports in the opening scene. Emilio Pucci and Paco Rabanne also made their mark in the sixties.

The British Invasion hit the United States in 1962, and Martin Luther King’s “I Have a Dream” speech was made. Rock n’ Roll and the newly prescribed birth control pill brought about a freedom in the sixties that allowed for neon colors and psychedelics. Mod style started to blend the ladylike fashions with more psychedelic accents, and in the mid-sixties the space age hit in full swing. This brought about kitten heels, thigh-high hemlines, and the boldest of accessories. The summer of love occurred in 1967, bringing in the hippie subculture. Flower power and buckskin vests with fringe were paired with maxi skirts and the peace sign, which was first seen in 1958 but used en masse in the late sixties. Chain belts and headbands were common accessories, and manmade fabrics like polyester, nylon, rayon, and spandex continued to dominate the textile industry. Along with hippie subculture came feminist influences of fashion, which pushed for more androgynous styles as feminists fought for women’s equality. The sixties ended with the wild Woodstock, which further extrapolated the hippie style, and the Stonewall riots kicked off the Gay Rights Movement in 1969. 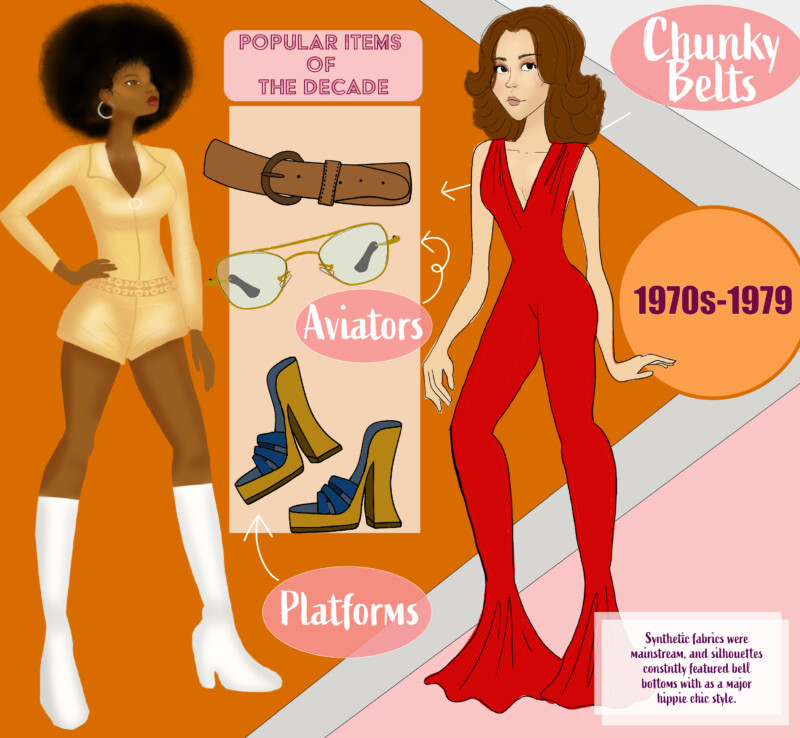 There were three main styles of the seventies that defined the decade; the lasting effect of the hippie style, vintage clothing from the fifties, and the androgynous glam rock inspired by disco and previous feminist influences. The hippie style of the sixties was maintained because synthetic fabrics became cheaper, and mass-produced fashions were easier to access. Bell bottoms and miniskirts stayed in style, but eventually, the hippie-chic styles transformed into a more casual look in the mid-seventies. Tee shirts were paired with jeans, and the average American woman adopted the style of a French peasant. Both genders featured tight tops with billowing bottoms, and clean-cut athletic wear, such as velour tracksuits, came into play. Nixon resigned in 1974, and the Vietnam War ended in 1975, allowing for the protests, and hippie styles that accompanied them, to fade away. Around this time, the divorce rate rose, and women entered the workforce again. This brought about more tailored looks, still feminine but professional. This resulted in more tailored formal wear, too, paired with chunky heels. Diane Von Furstenberg adapted to this change well and introduced the now-iconic wrap dress, which made dressing for the working mother a snap.

Halston and Missoni were also designers of the decade. The glam rock style of the seventies, often associated with disco, was also a callback to screen sirens of the forties. Long evening gowns with halter necks and leg slits were made modern with sequins, glitter, and plunging necklines. Polyester pantsuits were quite popular, but in the late seventies, the styles became less fitted. These baggy styles led to even more skin exposure. Velour, leisure suits, and crop tops are some defining pieces of seventies fashion. Across the board, chokers and embroidered vests were the perfect accessories, and polyester, corduroy, velvet, and satin were seen in many styles of the seventies. In 1979, Margaret Thatcher was elected Prime Minister of England, a show of women’s equality. 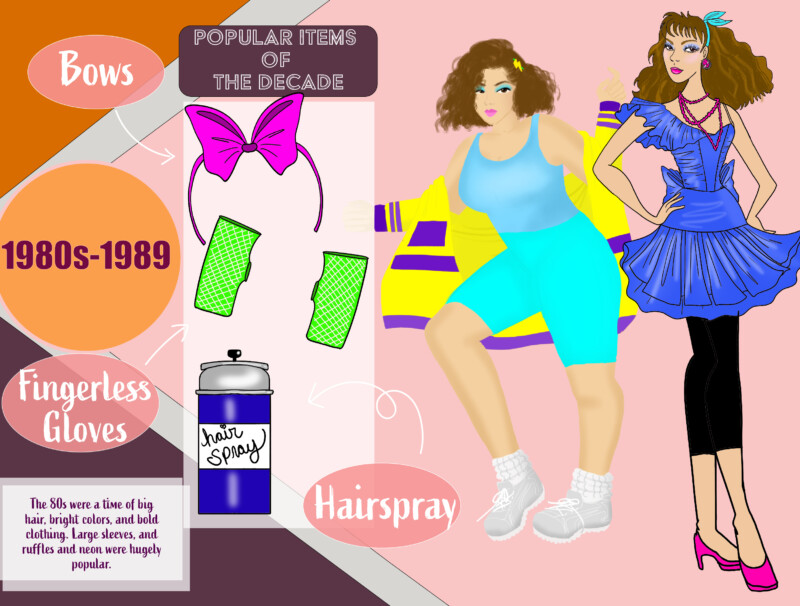 The early eighties took notes from the seventies, with baggy clothes and tracksuits making the rounds. Ronald Reagan was elected president of the United States in 1980, and John Lennon was murdered. An emphasis on minimalism and the aerobics craze brought about spandex and high-hipped bodysuits but quickly made way for the more rich, opulent styles that the eighties are widely known for. Michael Jackson’s Thriller, featuring Michael in an iconic red leather suit, came out in 1982, and bright fashions rose in popularity. As the eighties went on, the influence of movies such as Working Girls brought about the style of Power Dressing. This was a wealthy look, featuring shoulder pads and a blending of powerful businesswoman styles and wild dance clubs. Parachute pants and fingerless gloves still give some eighties teenagers flashbacks, as they were popular pieces of the culture. Velour, velvet, polyester, taffeta, and spandex were textiles of the time, and Christian Lacroix and Mugler were the top designers of the decade. The Chernobyl and Challenger Disasters in 1986 were stark reminders of how the space age could go horribly wrong, but the styles continued to grow bolder. The Berlin Wall fell in 1989, uniting Europe once again. The late eighties featured thin, bright heels, fewer shoulder pads, and preppy styles that made their way into the nineties. Throughout the 80s, and even into the early 90s, Madonna was a major fashion influencer. Her big style was a major contributor to the early styles of the eighties, and her neon fashions made their mark all over the late 80s. 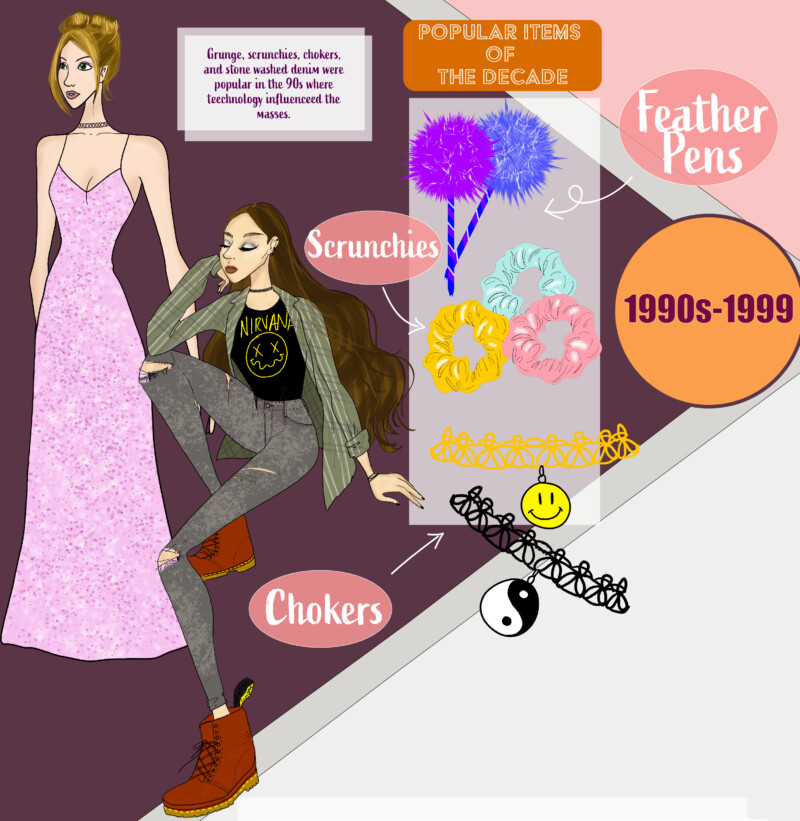 The World Wide Web was invented in the early nineties, bringing a whole new era of technology with it. Minimalism was big in the beginning, and Diana, Princess of Wales was a major fashion influencer, as well as the Big Five; that is, Linda Evangelista, Cindy Crawford, Naomi Campbell, Christy Turlington, and Claudia Schiffer. Eventually, Kate Moss was added to this group, which became the Big Six. Kate Moss brought about the “heroin chic” style of models, who were waif thin to the point of unhealthy. Although the aerobics fad of the eighties had transitioned into neon athletic wear of the nineties, heroin chic brought in the age of grunge, especially during the popularity of Nirvana and before the suicide of Kurt Cobain in 1994. Versace, Gucci, and Alexander McQueen were the designers of the nineties. Denim, often stonewashed, was very popular, as well as cotton, nylon, polyester, and pleather. In the mid-nineties, more form-fitting styles became the norm, with a variety of skirt lengths and hot pants. The Clueless age brought extreme preppy looks in style, with the sexy schoolgirl look worn by the likes of Britney Spears. Here, the choker, the scrunchie, and the kerchief become major accessories. Women over thirty who had no interest in repeating high school turned to the more ladylike look of the forties, sporting red lipstick and polka dots. In 1997, Princess Diana was killed in a car accident, affecting fashion and culture around the world. The seventies had a brief relapse, mixing disco and casual hippie styles. The late nineties saw Eastern influence and unisex casual wear. Gold hoops, tank tops, sneakers, and jeans were sported towards the end of the decade. The nineties ended in 1999 with the global population at 6 billion.

From full midi skirts to the A-line mini, crop tops to lampshade tunics, the 20th century was one the most turbulent in history. Fast-paced changes in technology led to even faster changes in fashion and culture. Skirt lengths fell and rose, the waistline was let in and out, and the world was torn apart and put back together again. Whether you’re a nineties baby longing for the mod stylings of the sixties, or a baby boomer missing your bell bottoms, there’s always a way to incorporate 20th-century fashion into your 21st-century closet. Check out this blog for modern takes on each decade, and let me know which period you wish you could relive in the comments!

How Does a Sewing Machine Operate?

How to Draft a Sleeve Sloper

How to Measure Yourself for Sewing and...

All About Neoprene Fabrics

Gift Ideas for Every Type of Sewist

How to Alter a Pattern to Adjust...

A History of Measuring

How to Create a Back Bodice Sloper