In preparation for Star Wars Day tomorrow, I made a tiny Rey costume! 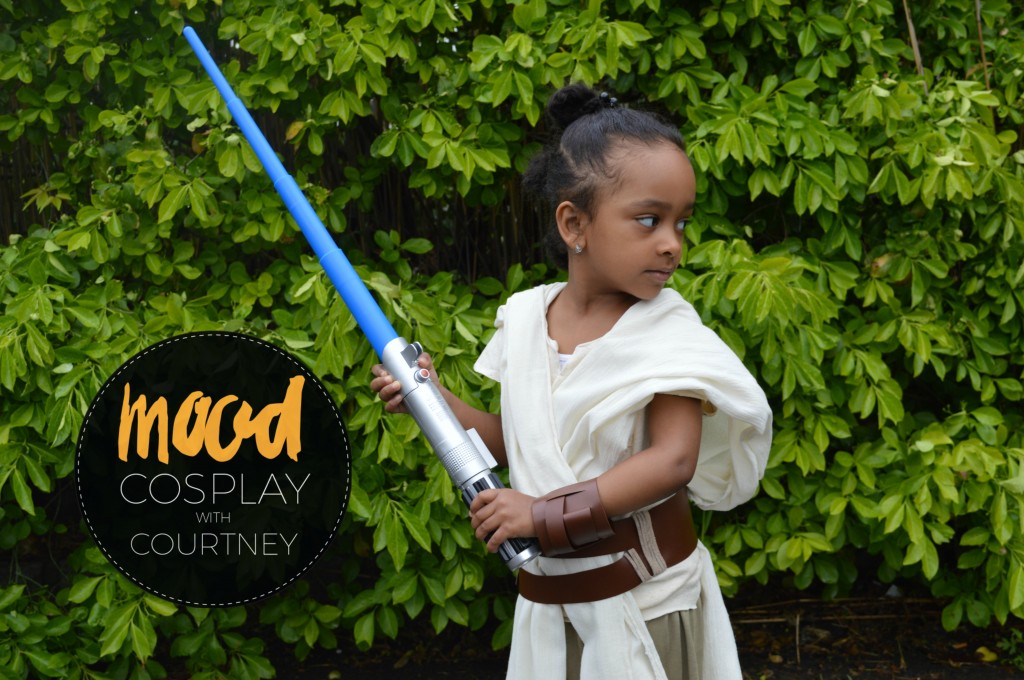 Before I go into how it was created though, let’s take stock of what Rey wears. 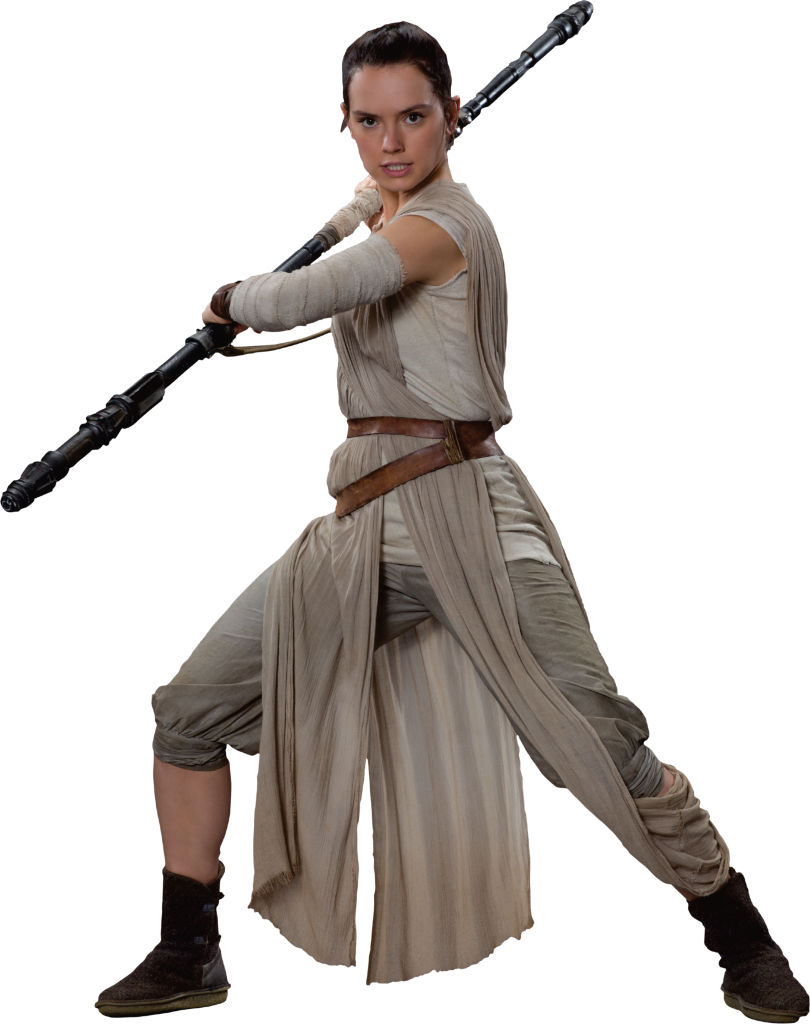 Starting at the top: she has a tunic-like shirt, arm wraps, the gauze overlay, matching belt and wrist guard, capri pants, and boots. I began with the shirt, which was incredibly simple to make. 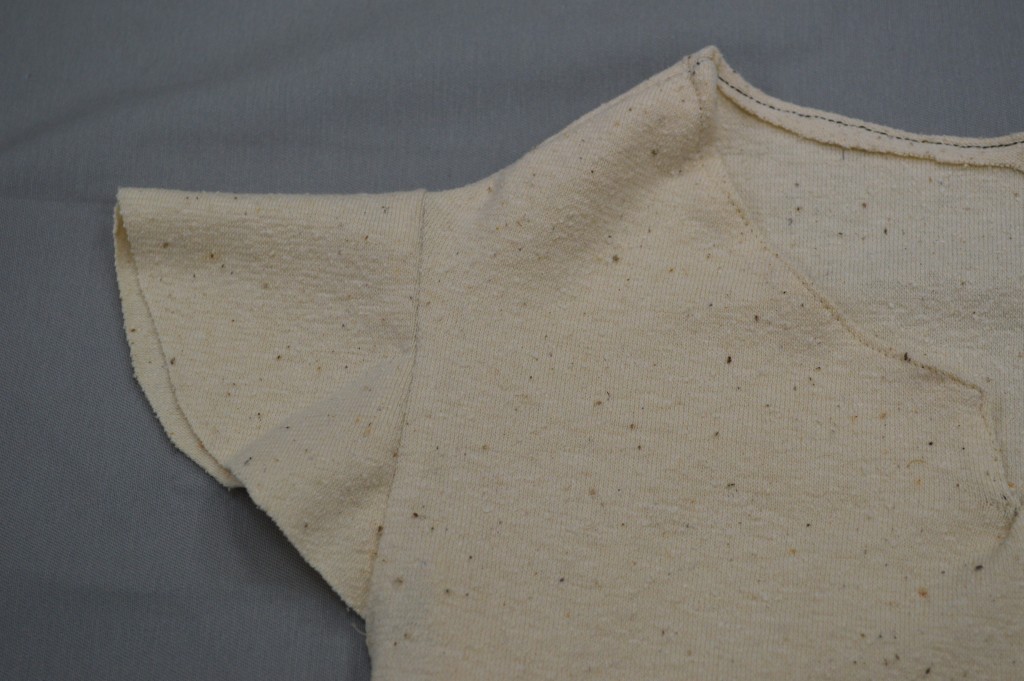 For the pattern, I simply traced an old t-shirt and made it about 4″ longer, since Rey’s falls almost to her thighs. According to Star Wars Celebration, the shirt used in the film was a hemp-cotton jersey. For comfort’s sake, I decided to use Mood’s Natural Solid Jersey, which looks rustic while still having a soft hand and a heavy 4-way stretch. If you look closely at Rey’s sleeves, they’re actually two tacked on bits of fabric, possibly scavenged. I went with the same material as the rest of the shirt, but to get the shape, I simply cut out two small crescents.

The belt is essentially a skinny ‘K’ lying on its side. The top part should be about 2″ smaller than your waist, with a 4″ tail on the end, which will fit through the belt buckle. Mood has a ton of leather and vinyl to choose from for this, but I went with their Faux Leather Vinyl.  It’s stiff enough to hold it’s shape, but not difficult to work with. It also doesn’t have a backing, which is a plus since the wrist guard wraps back around itself, showing both sides of the fabric. Another quick thing to note about the belt is the twine wrapped around the one side. For that, I used a bit of Mood’s new suede cords. 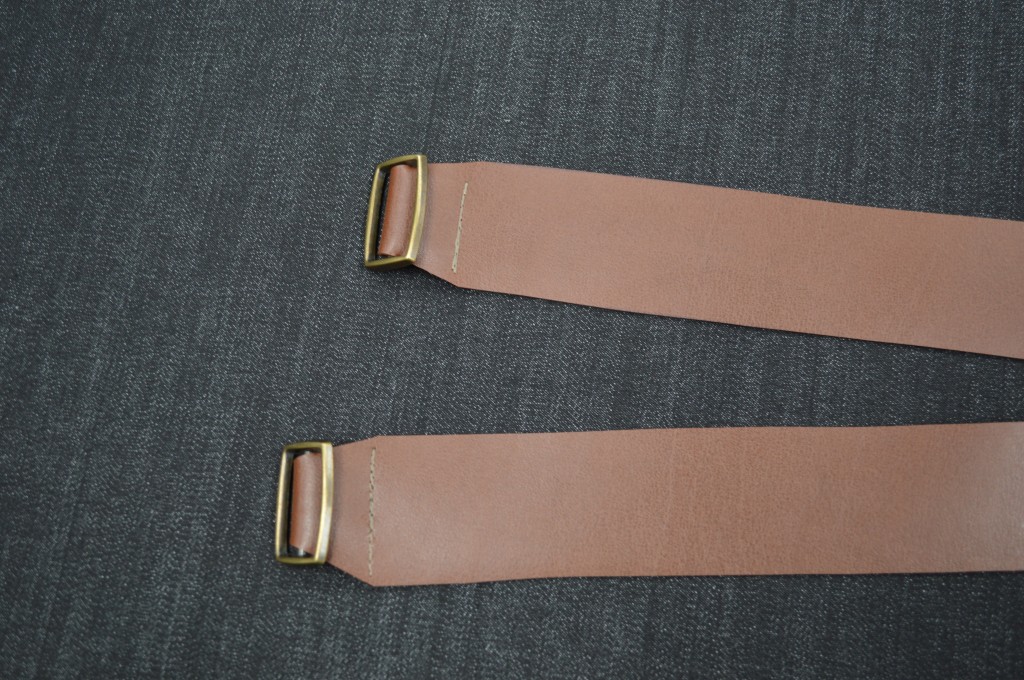 The wrist guard ended up much simpler than it appears. The main part is about 6″ long, and then it tapers off for another 10″ or so. The widest part is 4″. The four slits you see below are for wrapping it around the wrist; the end laces through the slots on the end, wraps back around itself. and gets tucked into the cuts toward the middle. 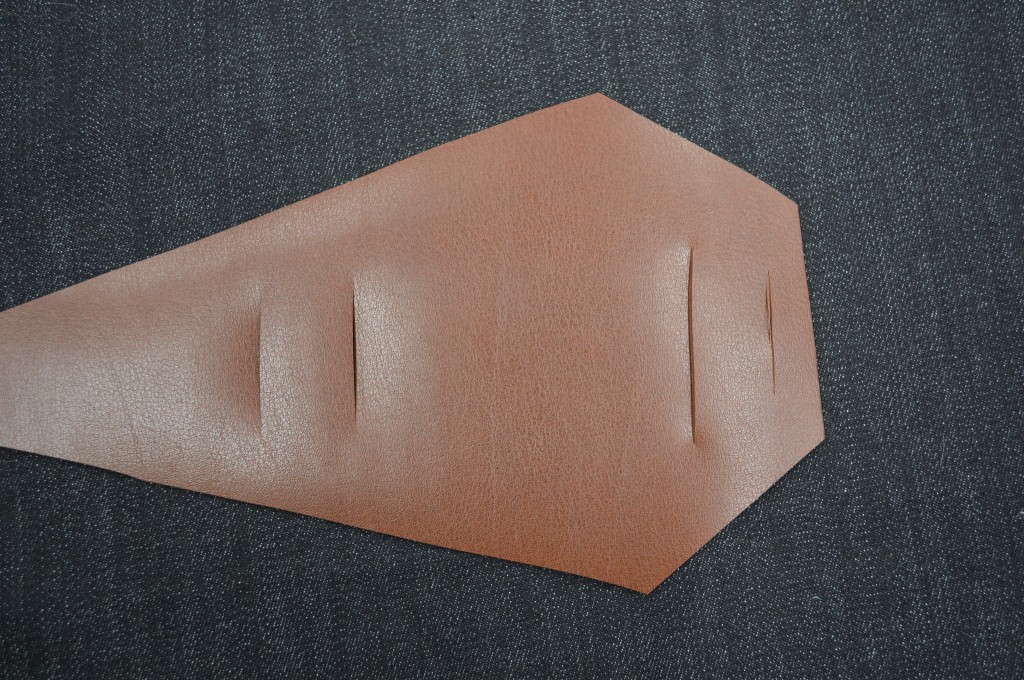 Rey’s pants are a bit deceptive. In some photos they look brown or tan, in other’s they’re a bit green. It turns out they’re actually an olive-toned silk. To replicate the look of a silk, while keeping this costume comfy and cost effective, I chose to work with a lightweight rayon jersey. It has a gorgeous, slight sheen and was incredibly fluid.

I drafted the pant pattern so that there was only an inseam, so I was left with 2 panels, rather than the typical 4. I traced the back seam of a pair of jeans against the selvage, flipped them over and shifted them another 8″ and traced the front seam. since Rey’s capris are a bit baggy and gathered at the bottom, the panels just go straight down, rather than curve along the leg. If you’re making these for an adult, you’ll probably want to make the gap wider than 8″; the longer the gap, the more fully gathered the pants will be. 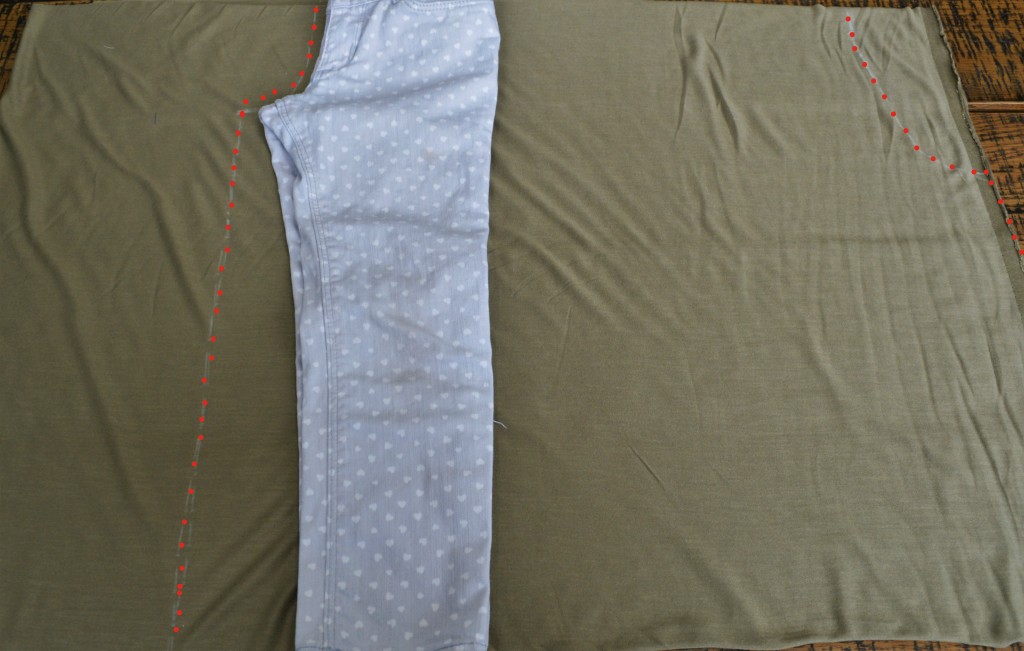 After I cut the leg panels, and sewed the front, back, and inseams, I needed to make the waistband. Since we never see the top of Rey’s pants, I decided to make a wide band, to prevent it from rolling. It’s 7″ wide, folded in half to make a 3.5″ waistband. 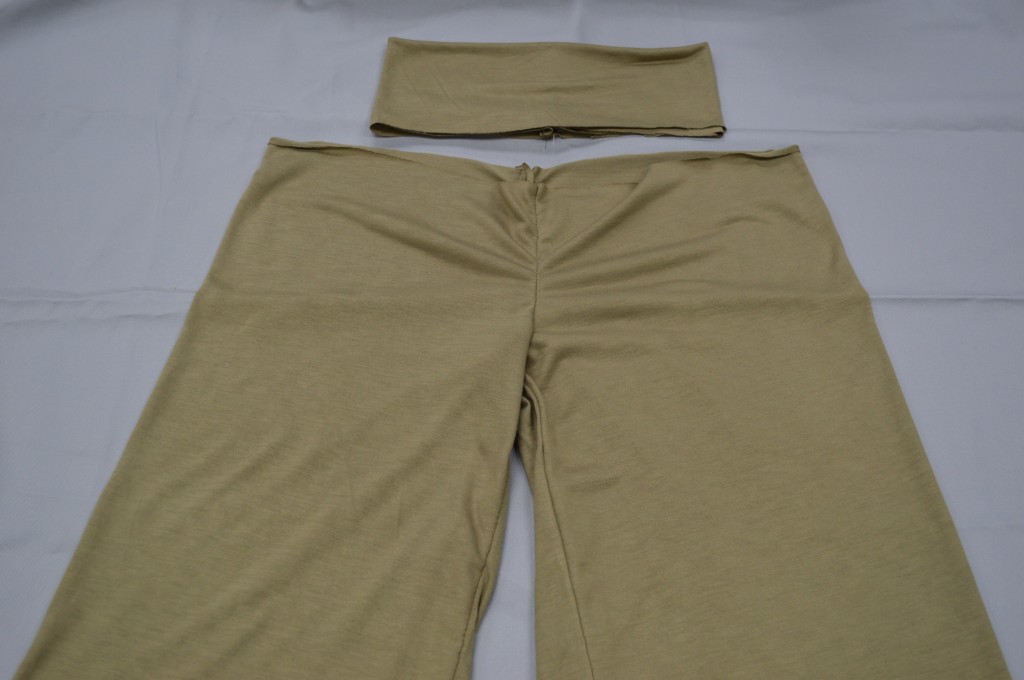 The pant legs were then gathered to fit the waistband, like you see below. 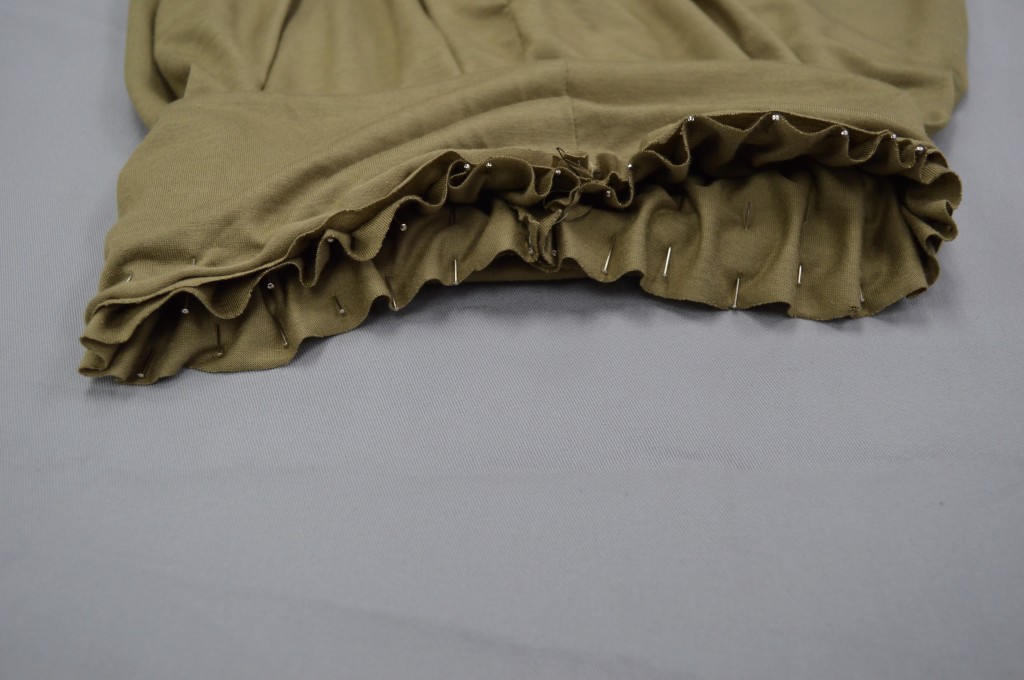 In the first scene Rey appears in, she wears ties around the calves. It turns out, those are present for the rest of the movie, however they’re pushed up and tied around the cuffs on the bottom of the pants. While sewing the cuffs, I added two strips of fabric, so they can easily be worn up or down. 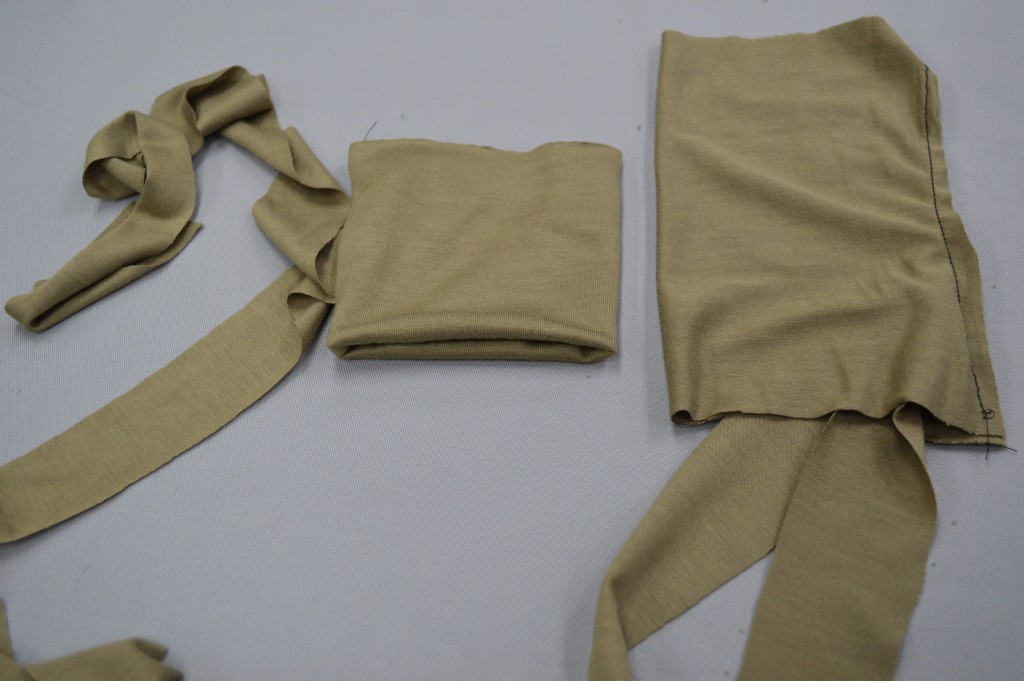 The final step was the gather the bottom of the capris and add the cuffs, much like the waistband. 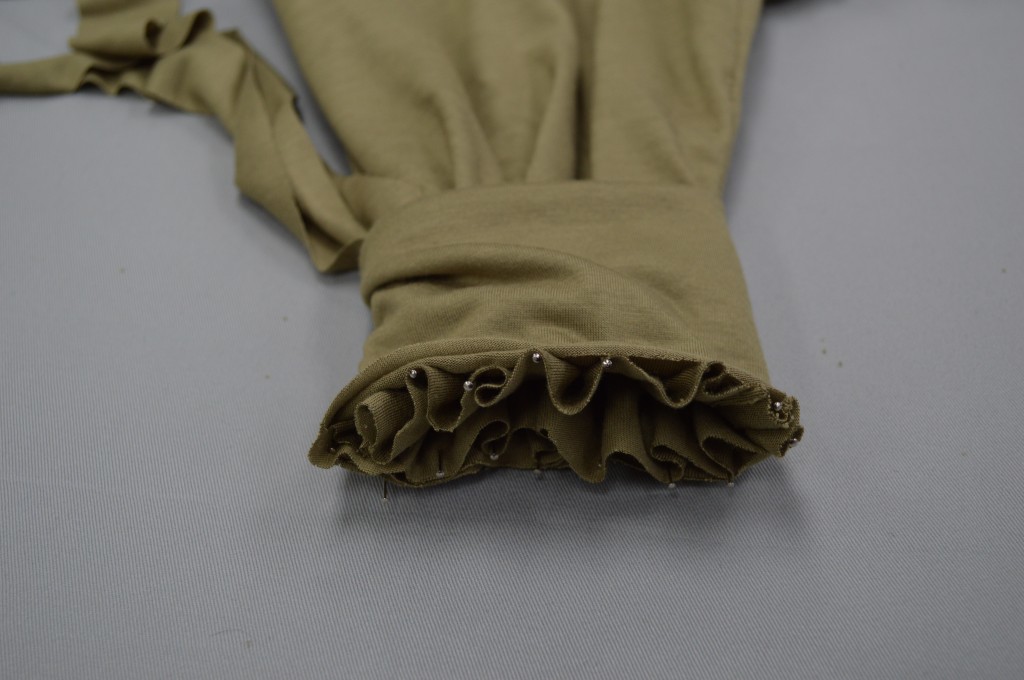 She also wears arm bands, which some make with the same fabric as the shirt. I’ve used self-adhesive ACE bandages, which stay up a bit better. From here though, it’s just finishing touches. One of the best options for a more worn look is coffee dye. Boiling the gauze in coffee for about 30 minutes would probably make the overlay look perfect! 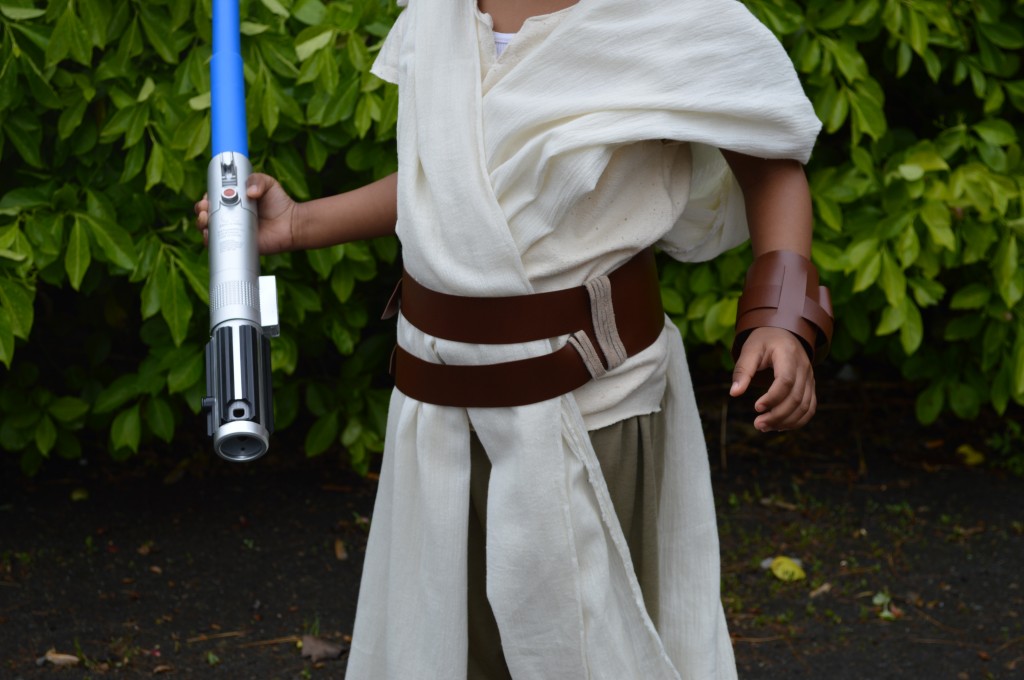 All together, it’s quite a few layers, but it looks like someone is ready to resist the First Order! 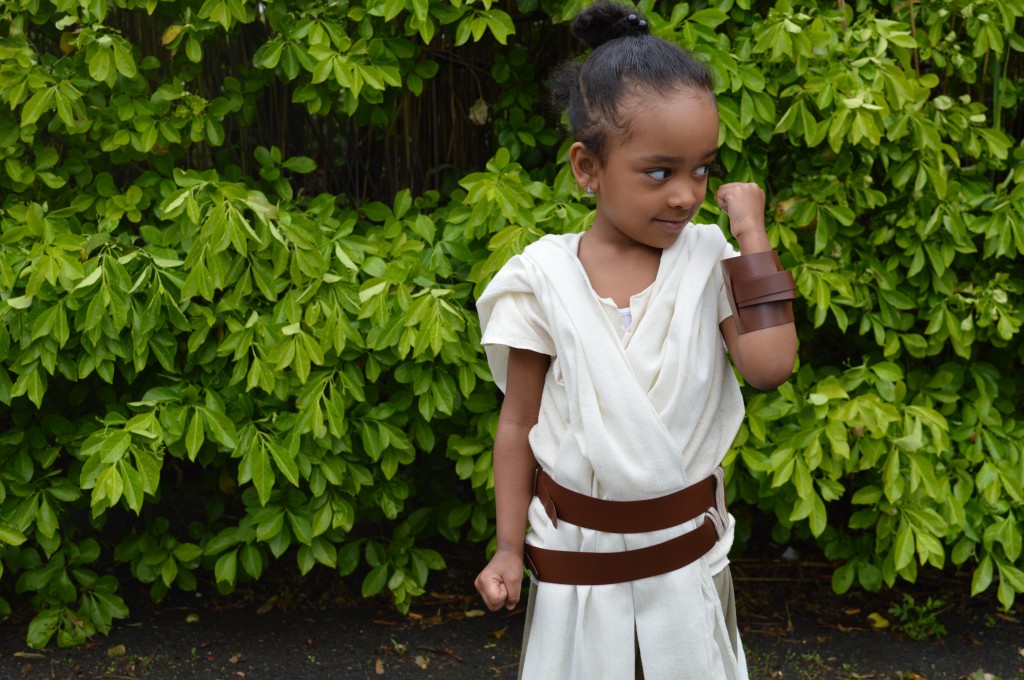 A Quick Guide to Draping: Tips and Fabrics

Mood Insider: Everything You Need to Perfect...