Project Runway All Stars at Mood Fabrics: The Aftermath

Last summer the producers of Project Runway All Stars approached us about filming an entire episode of the show at Mood Fabrics NYC. Everything but the runway and judging would be filmed at Mood, they told us. Even the models would get dressed at Mood.

We thought about it for a split second, and of course we said yes. Though having the show here for more than just the usual fabric shopping scene meant a lot of rearranging of our retail space, we took a cue from Tim Gunn and made it work.

What you see below is the aftermath of filming this episode at Mood, i.e., “When the Designers and Crew Left the Building.” 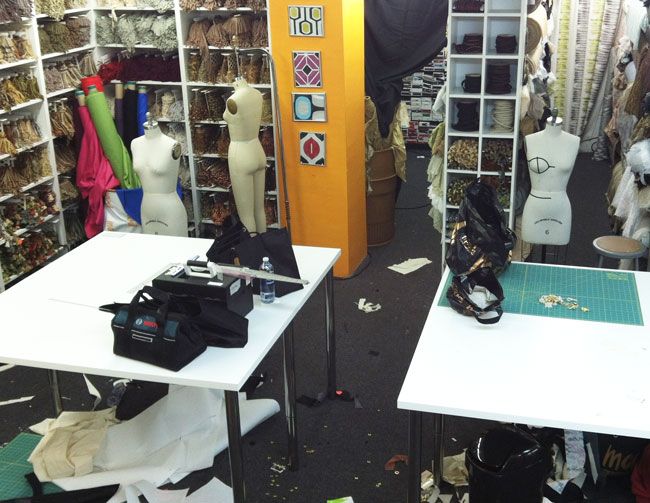 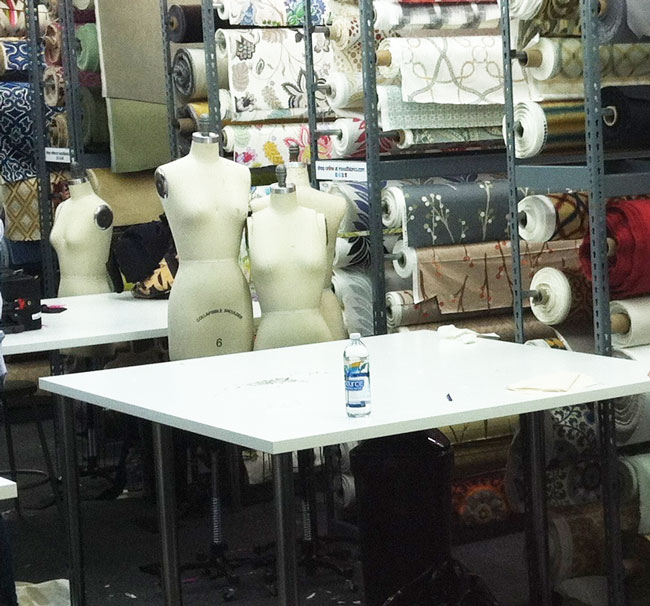 Cutting tables were stationed in two areas on our home floor. One work area was just outside of Mood’s offices. I listened hard for the drama but didn’t hear a peep from the designers the entire day they were here. I guess the first episode is too early for them to start in on the cattiness and iron throwing? 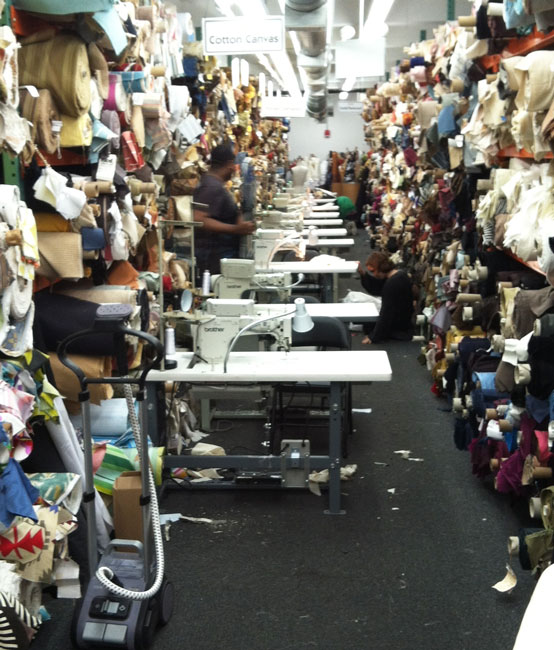 Two aisles on the home floor became the sewing area. 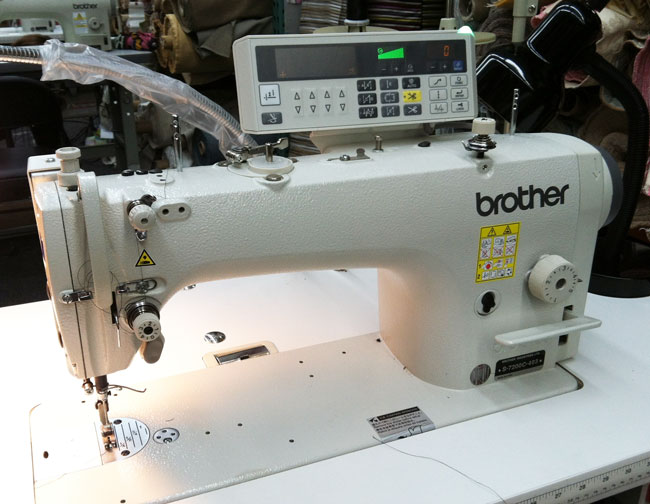 Here’s what their Brother industrial sewing machines look like, by the way. I want. 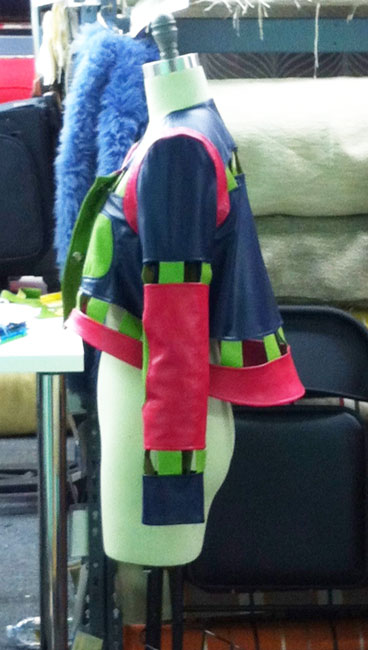 Elena’s work in progress. (I’d love to show more WIPs but we weren’t allowed to photograph until the filming was over and the designers had left.) 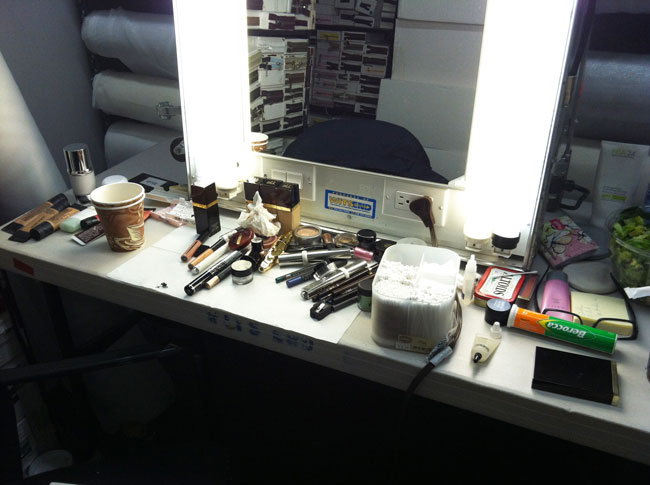 The makeup station was tucked away in a cramped corner of our home floor near our offices. Mentor Zanna Roberts Rassi was a good sport for putting up with the Mood employees who had to scoot by her as she was being made up, just so they could get into the office area. 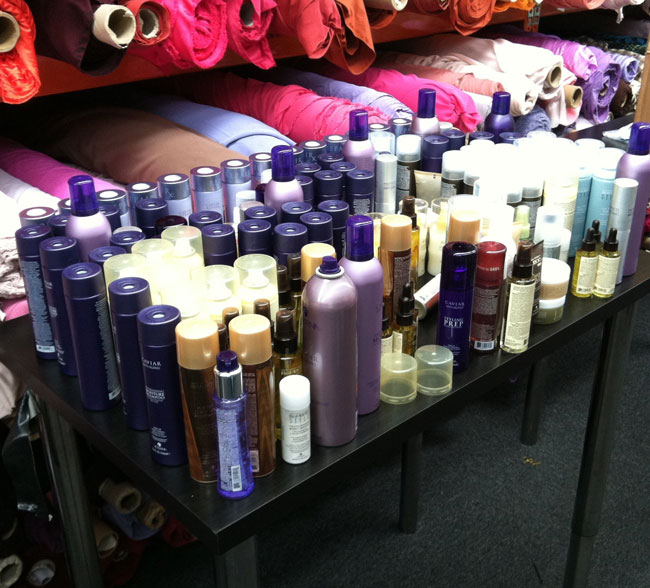 How about a little styling product with your matte jersey? 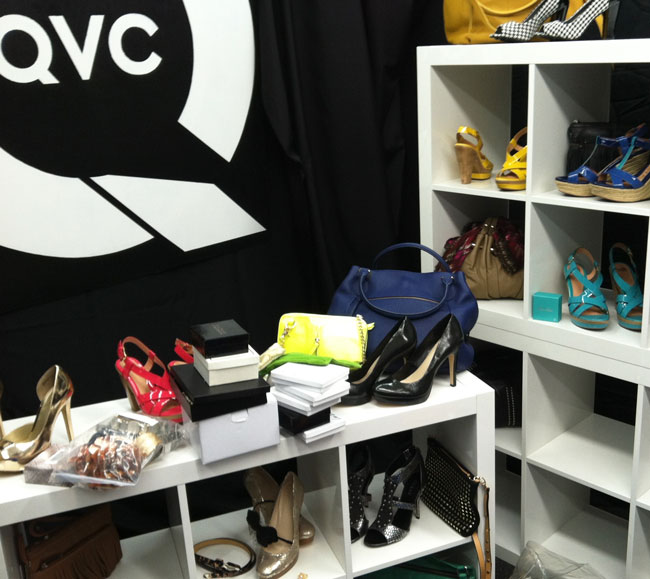 The QVC shoe and accessories wall was located in our faux fur department. Next to fabric, shoes and handbags are my weaknesses, so I’d have been completely cool with this staying behind. 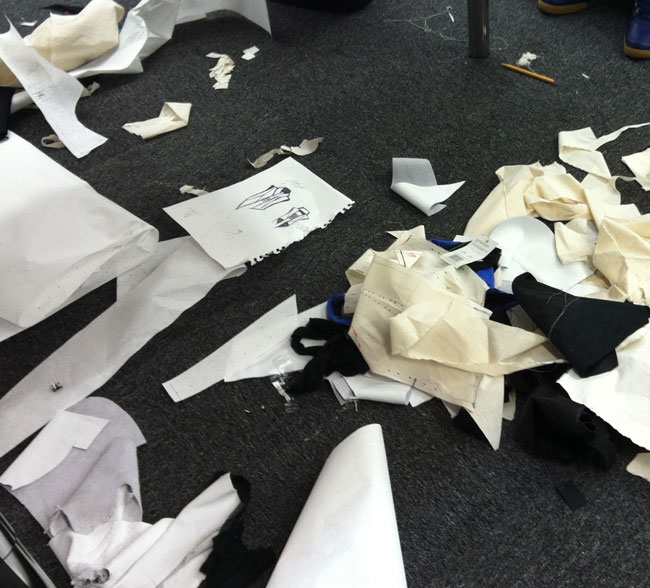 Here’s what it looked like after the filming ended. Think your sewing area is a mess? Take a look at this debris left behind and you’ll feel better about your space!

We loved playing host to Project Runway All Stars for this episode. It was a lot of work, but really worth it.

I was thinking about you while watching last night. Was Swatch there during all this? I guess he was OK with the extra activity? I always wonder WWSD. 🙂

Wow! I feel way better about my sewing process now! 🙂 How fun for you guys!

Holy smokes! Looks like it was a blast (I’m in love with that Brother machine too!)

And then the Home Dec Manager had a heart attack, end of story ; ) love it!!!

I know! I kept thinking “POOR SWATCH”! What an invasion to his domain! LOL! He’s the coolest pooch in NYC! I can’t wait to get back to NYC to visit him again and play with him with the ball! xox

When did that show air. I don’t remember it. Where can you buy the machines?
It all looks so exciting.
I love coming to your store!!!!

Pretty in Pink- Girls Dress in a...

How to Sew a Simple Fun Maxi...