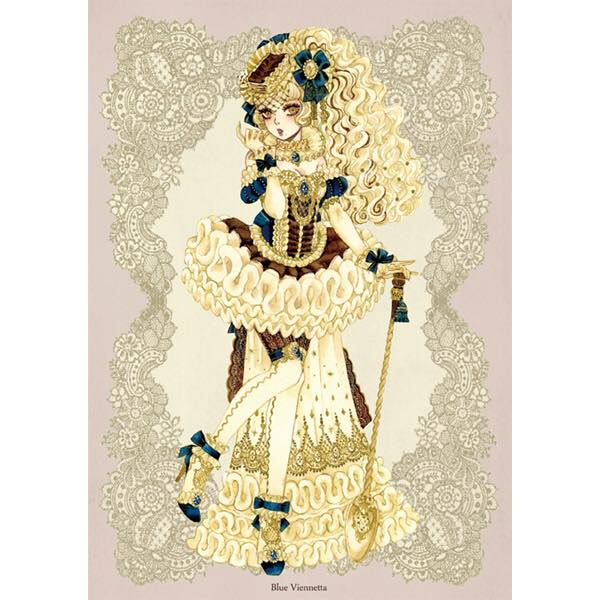 As a mostly prop and armor builder, this project was pretty terrifying at first for me.  No joke, the only things I had made prior to this costume were simple loin cloths and finger less spandex gloves.  I really wanted to learn to sew better and I thought, “I’ll pick something really big and complicated so I can learn all the things.”  I chose Blue Viennetta specifically so I could learn a lot of different techniques that would turn me into a magical sparkly unicorn seamstress.

A tremendous amount of research went into Blue Viennetta; I researched neck ruffs and pleating alone for about a month before I even started on the skirt!  I watched tons of tutorials and scoured sewing blogs that contained anything relating to my costume.  But even with the research, it was mostly just guessing and figuring stuff out!  I am by no means an expert and I certainly am not a professional seamstress.

Although, there are a bunch of things I wish I had done differently (perhaps I will update at some point because I am an insane perfectionist), I am extremely proud of what I was able to accomplish in a relatively short amount of time.  This is definitely the start of a beautiful friendship with luxurious fabrics and needles and thread☺. 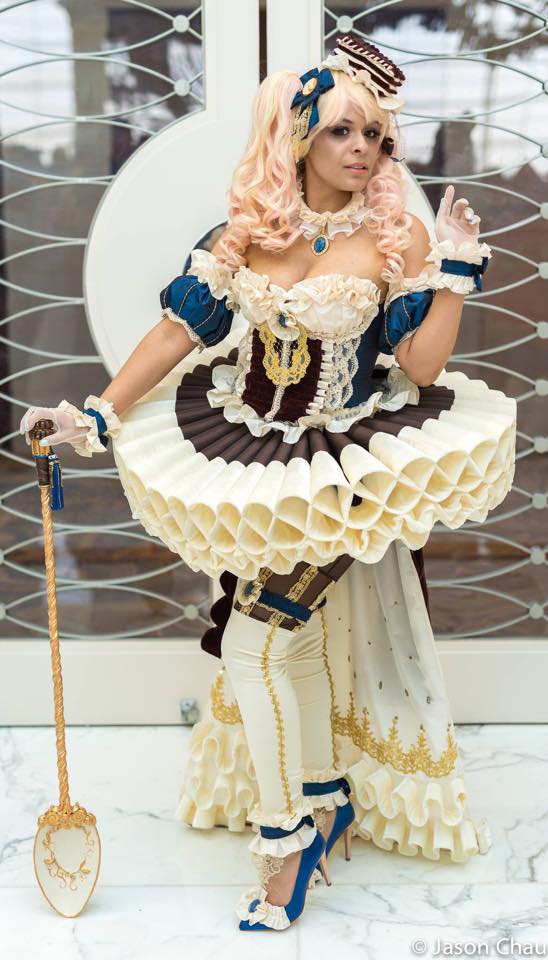 Because there is a plethora of talented ladies out there who have made great write ups on corsets, I’m actually going to focus mainly on the skirt and a few details.  The biggest and by far most noticed part of Blue Viennetta, is the skirt.  It’s basically a very large version of a traditional Elizabethan neck ruff.  I didn’t know this when I started, so I was looking up things like “Gigantic candy looking skirt” and “Mother of God Huge ruffly skirt.”  As soon as I discovered what the skirt was, things became a lot easier.  All I needed to do was learn how to make a neck ruff and enlarge it to the size I needed for my skirt.

There were two main concerns with the construction of this skirt.  The math and how the hell was it going to stay up?  I’m terrible at math and thankfully, I was working at a private equity firm at the time and one of my coworkers helped with the math.  I wish I had taken a photo of the math, but the paper is now lost somewhere in my messy craft area, haha.  Something about waist size x number of ruffs (according to their size) and so on…

The paper tutu helped to get an idea of what the skirt would look like, but I still didn’t know how I would get the fabric to stay up.  Making the ruff similarly to how ballet pancake tutus are made wouldn’t work since there weren’t horizontal layers of tulle to sew wire into.  I ultimately decided to make a pancake hoop skirt that would sit underneath the ruff.  Anyway, once I knew how much fabric to buy, I went to Mood to pick up supplies! 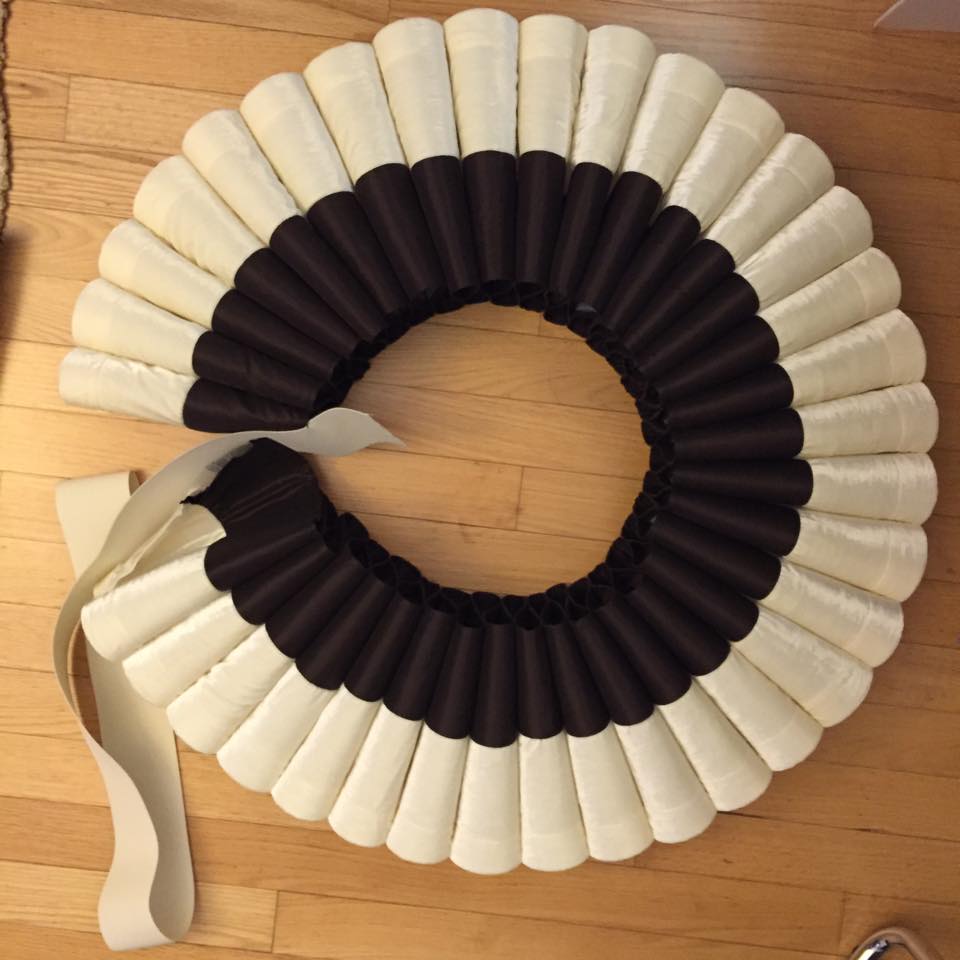 The fashion layer of the skirt is made from cream velvet and brown silk taffeta.  Even though there would be a hoop underneath, I need to firm up the fabric.  So, after cutting the velvet, I interfaced it with the stiffest interfacing I could find.  I’m not sure it was necessary, but I also sprayed the interfacing with a spray starch before ironing it on.  Prepping the fabric really took a lot of time!  Once the velvet was ready, I sewed it together, end to end and did the same with the taffeta.  After this, I then sewed the velvet and taffeta together.  At this point, I decided that I wanted to also use horsehair to give the eventual cartridge pleats a very rigid shape (the velvet was still so soft and floppy).

My best friend during the creation of this skirt was horsehair braid.  I used so much.  I went back to the store twice to buy more because I not only ended up sewing it under the velvet, but taffeta too.  In total, there are 71.75 yards of 6” horsehair used! The entire underside of the velvet/taffeta layer is lined with horsehair and it overlaps itself in the middle.  One thing I wish I had done was sew the velvet on without pinning it to the horsehair.  In the Blue Viennetta drawing, the skirt is pretty fluffy and organic, whereas my skirt is very structured.  That’s because I made the mistake of not looking at the reference while I PINNED THE HELL out of the fabric.  The two smaller layers are noticeably fluffier and that’s because I realized my mistake by then.  Now that that fabric was sewn together, it was time to start manipulating it into cartridge pleats!

Cartridge pleats!  There is a great tutorial I used in my references list on how to make these.  Basically, I measured and marked a spot with a pin every six inches down the middle of the entire length of my fabric.  Six inches because that’s how tall I wanted my pleats to be.  Once marked, I threaded through each pin marking, weaving in and out of the fabric.  I didn’t cut the thread for this, but rather just kept the spool going.  Since I needed the thread to pull the pleats together, it needed to be all one continuous length.  After threading through the entire length of fabric, I started to very carefully gather the pleats together.  I tied a knot at the end and starting carefully pulling the thread from the spool end.  As the pleats started to take shape, I had to put the end against a wall to control the thing, from flying around, the beast that it was. 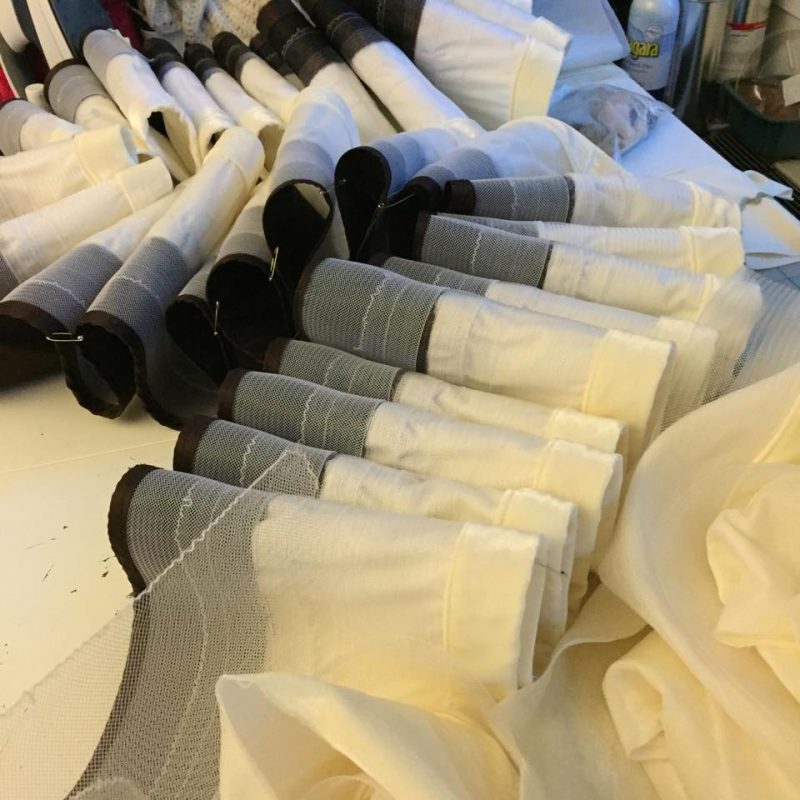 So after everything was gathered up, I added a safety pin at each gather to help stop the pleats from coming out.  The I put a few stitches by hand at each of these points.  35 pleats with two each on the inside and outside is 140 separate points and a lot of patience!  Obviously, I used white thread on the velvet and brown on the taffeta.  Just like on little cartridge pleats, I added a waistband.  But this one was a nylon and elastic band the same width as the pleats, to give extra strength.  I sewed the band to the skirt on the top and bottom.  Okay, phew…the big ruff is done!  Time to try on…

Once I finished the skirt construction, I did my first test fit and when I first put that thing on, it was like a rush of excitement and unicorn tears.  Seriously happy that I had figured out how to make something this elegant and even MORE excited that it completely stood up on its own and didn’t even need a hoop under it!  The horsehair was strong enough and I am confident that I wouldn’t have even needed to interface if I didn’t want to if I made this again.  Sewed on some heavy duty snaps to close the waist band and some smaller ones on the velvet for closure, and this giant ruff was done 🙂

There are two smaller ruffs on the skirt.  I realized that the outer edge of the ruff should have been fluffier that I made it by this time so I made the two smaller ones really fluffy.  These were much more free to sew.  All I did was basically take the strip of velvet and horsehair, pin it loosely to the bottom of the big ruff and then sew into place.  They didn’t have to be perfect, as it was meant to look more organic.

The last little bit of detail on the skirt is the layer of ruffles on the waistband, which I made with with the same silk satin I used in other parts of the costume.  There is also a blue silk taffeta bow which is sewn to the top of the skirt on the back.  This is the bow top to the tails that are connected to the skirt train (which also has ruffs on it that were made the same way as the big ruff).  The train is made of silk satin and is covered in hand sewn beads, sequins and crystals.  There are three layers of ruffs as the bottom of the train and it is finished with pretty brown velvet and blue silk taffeta bow tails adorned with gold beads. 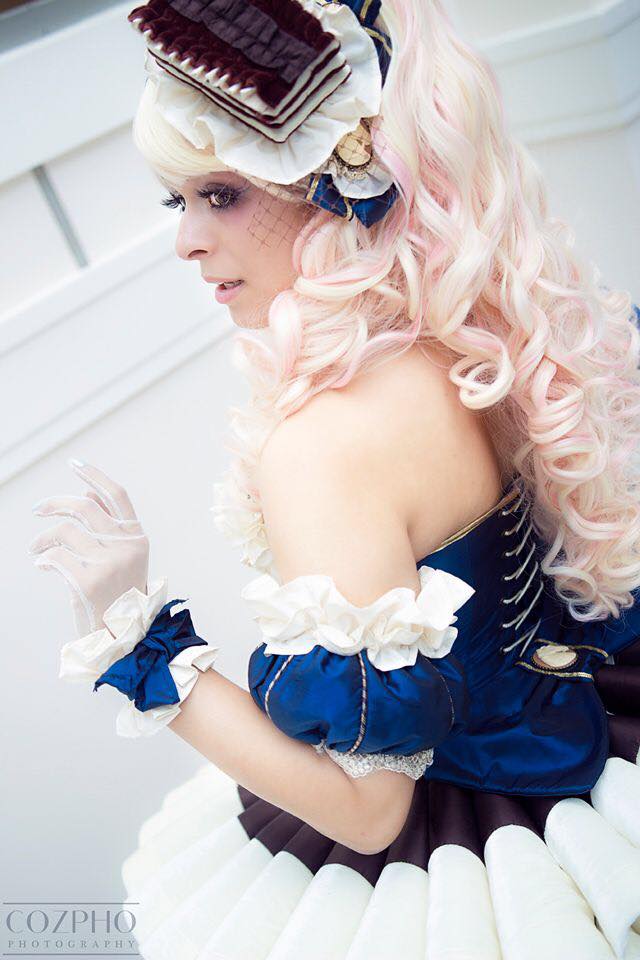 The other really fun part of this costume is the Blue Viennetta hat!  I made it out of three pieces of foam that were sandwiched with cream spandex and brown velvet.  The pieces were sewn together and then ruffles added at the bottom and top in cream silk satin and brown silk taffeta to create an “icing.”  It was finished with a delicate brown netting that hangs down in the front.  It easily pins to a wig or hair.  I’ve admittedly worn this out… 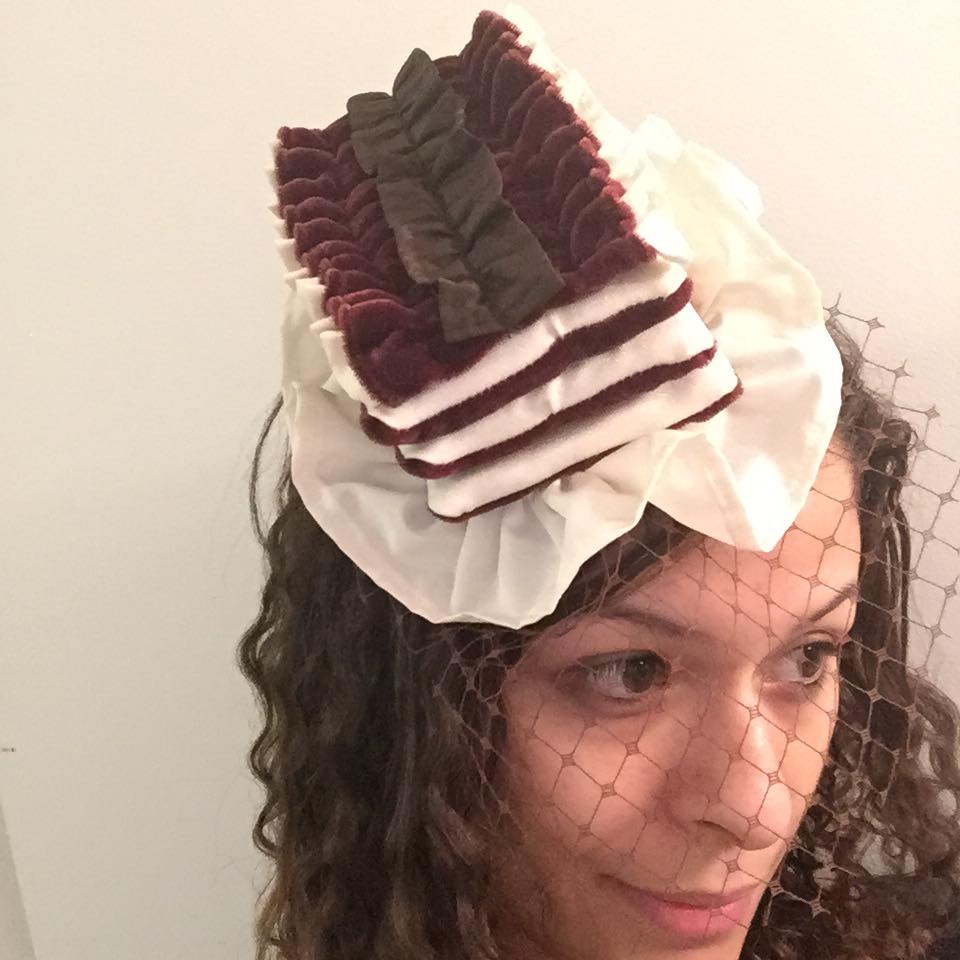 The following is a list of everything I used to make Blue Viennetta: 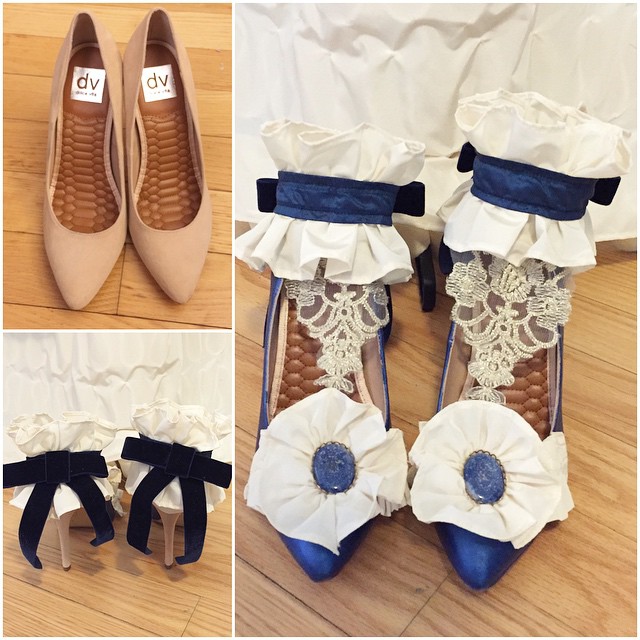 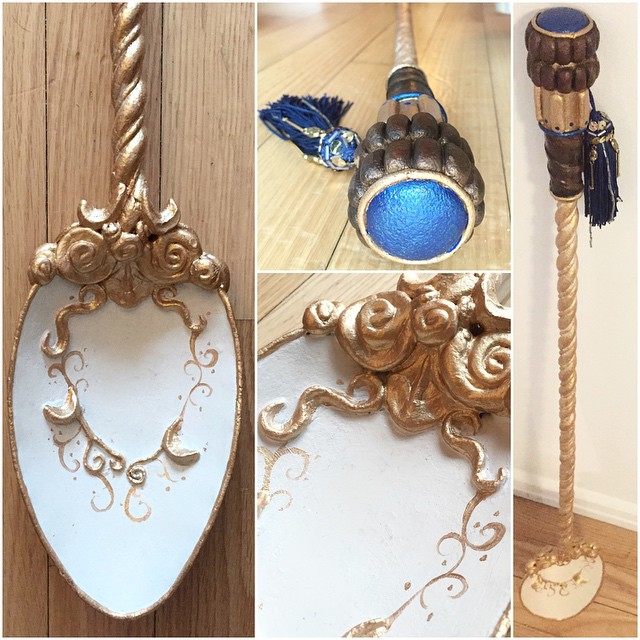 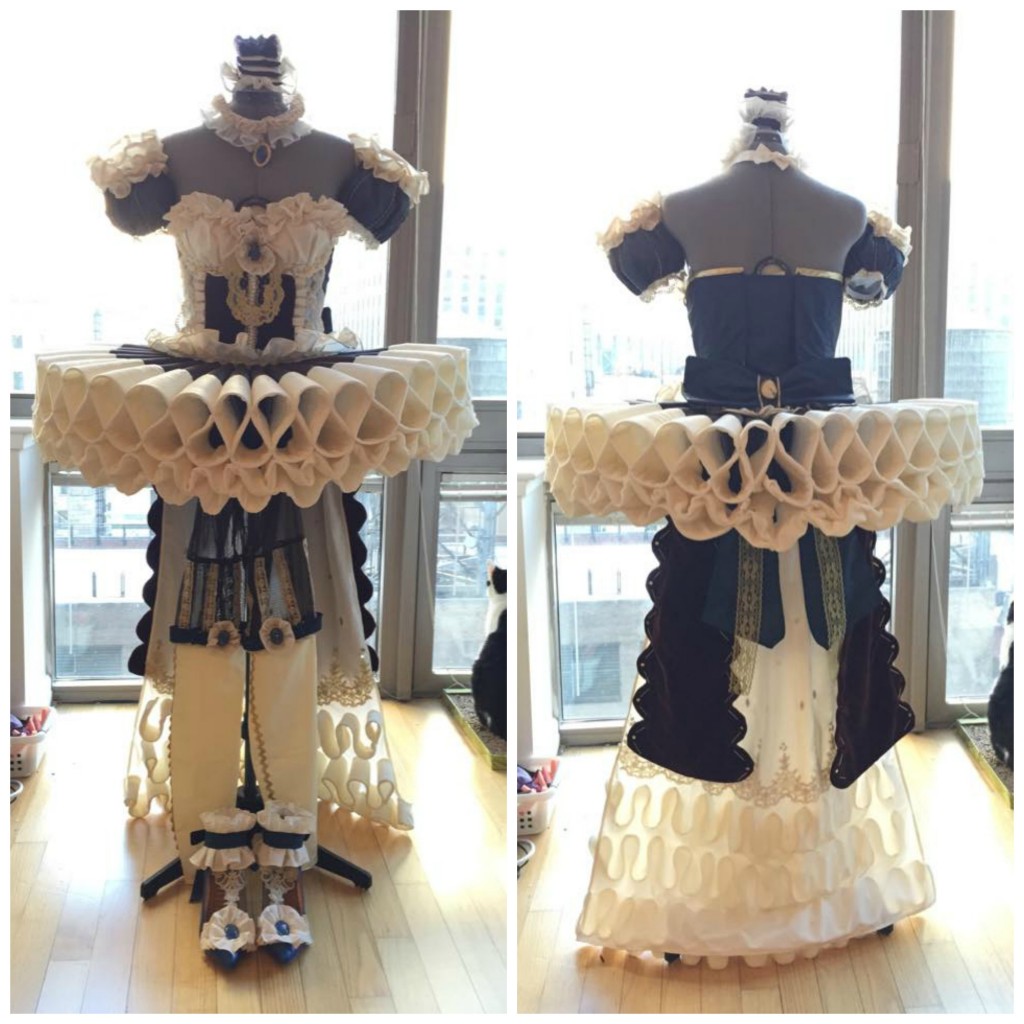 Front and back views 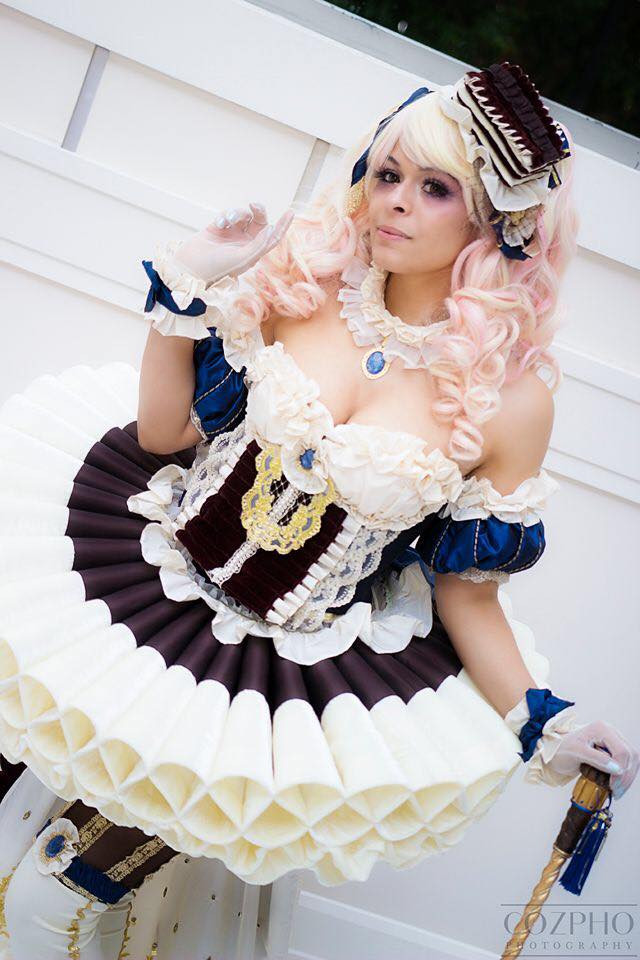 There are many, many details to this costume which I did not go into because there are just too many for one post, but if you have any questions at all, please feel free to contact me.  I’d be happy to answer any questions 🙂

Special thanks to Mood Designer Fabrics for allowing me to take over their blog for a bit to share my cosplay with you!

If anybody is interested, please find a few of the references I used while making this costume:

http://www.elizabethancostume.net/ruffmake.html -So many great ruff tutorials, and a lot of history on them!

http://www.elizabethancostume.net/cartpleat/ -Tutorial I used to make my cartridge pleats on skirt and neck ruff.

http://thecuttingclass.com/post/90669276728/creating-cartridge-pleats – Another cartridge pleat tutorial with nice and easy to comprehend illustrations.

Outstanding job on a first time sewing project!
Keep up the good work!

Impressed! Wow! A lot of work but most certainly worth it.

You did a great job on this! And thanks for the resources on making the skirt – not that I’ll be making one, but it’s still fascinating reading.

Wow! Congrats! That’s just incredible, unreal, a dream and the colors are very beautiful. I like really this cosplay ❤️❤️❤️

Mood DIY: How to Re-Cover an Ottoman

How to Use Your Fabric Stash