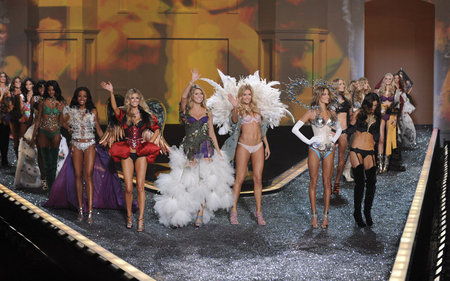 Tonight aired the Victoria’s Secret Fashion show and it was a runway filled with fantasy, playfulness, and a hint of sexy. Victoria’s Secret always promises to deliver a show that is sexy yet fashion forward and this year fell nothing short of expectation. 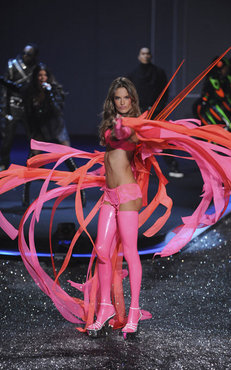 For the opening the girls walked to the beats of the Black Eyed Peas and opened with Futuristic Vixen. All the outfits were neon ensembles with plastic neon wings all cut in different shapes and sizes. My favorite look from this theme was the opening look worn by Alessandra Ambrosio. The different shades of pink mixed with PVC knee highs and spiky wings was innovative and eye catching. The movement of the silk chiffon was perfect for the opening look. 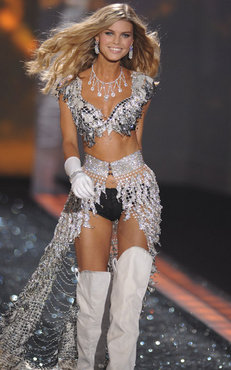 From the second theme, the Bejeweled Sex Kitten, my favorite look was the skirt and bra crystal combination. The detail in the skirt and bra was mind blowing and the look stood apart from the rest of the show. This was also probably one of the heaviest outfits on the runway!! If you watch the runway live you can see that the model is having a hard time strutting her stuff while carrying all that weight. 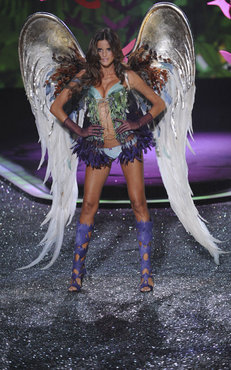 In the Fairytale Princess theme, Heidi Klum made a guest appearance weeks after giving birth but my favorite look was similar to most of the other looks in this theme apart from her massive angel wings and knee high cut out stilettos. 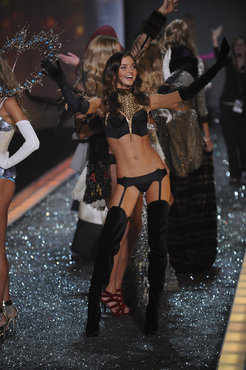 For the closing of the show, Miranda Kurr looked sexy and super cute in her Medieval Warrior look. The look was a classic black lingerie with over the knee black boots, elbow length black gloves and a huge gold necklace with small lack feathers in the back. It was a nice way to end the show, emphasizing that classic is always the sexiest.

Is that Eric posting these blogs?

My favorite theme was “futuristic vixen”. I did enjoy the blog. Short , to the point and well written

It’s so lucky for me to find your blog! So shocking and great! Just one suggestion: It will be better and easier to follow if your blog can offer rrs subscription service.

the Japanese version of Victoria’s secret is called Ravijour
http://www.japansugoi.com/wordpress/forget-victorias-secret-look-at-japans-sexy-ravijour-lingerie/

Why are Primary Colors Trending for Fall?

From Runway to Ready-to-Wear

Nostalgia Core: How the 90s are Affecting...

Print Trends for Spring and Summer 2022

Trends for Genderless and Inclusive Sizing