When the Pomonok Library in Queens ran a summer sewing camp for teens, some of its tween patrons felt left out. Librarian Frances Grossman suggested that they host their own version of Project Runway. When she contacted the Weinstein Company to ask permission to use the Project Runway name, the event took on a life of its own. Weinstein gave permission to use the name and reached out to its Project Runway partners, including us here at Mood, to co-sponsor the event. 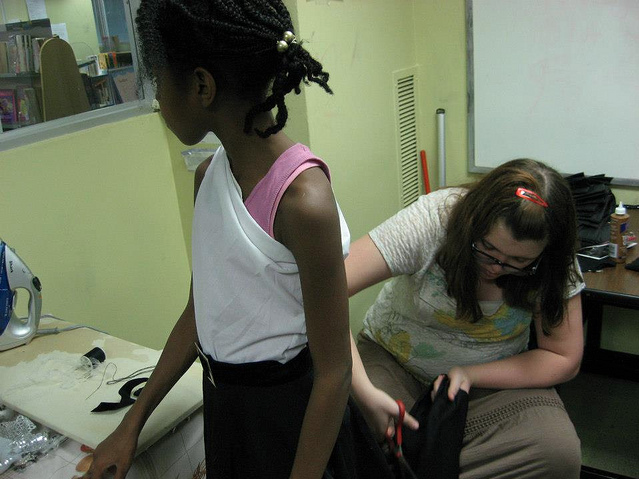 Designers were given their challenge in advance—taking donated men’s clothing from a local dry cleaner and transforming them into chic feminine looks—and had only four hours to make it work. 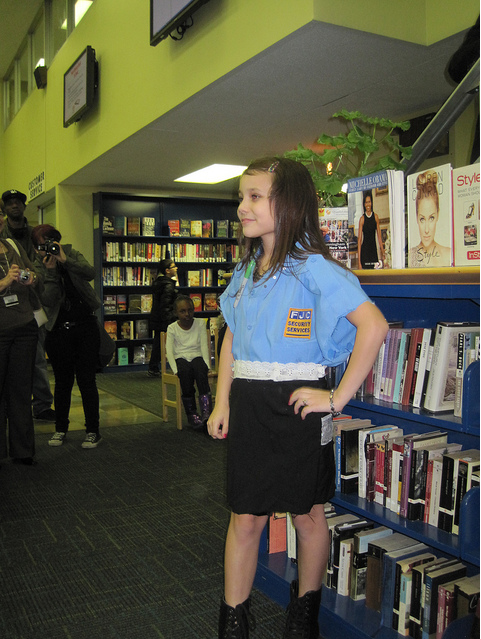 The runway competition was fierce.

After visits to the accessory wall and the hair and make-up stations, the library was transformed into a runway. The tweens modeled their looks as judges and photographers looked on. 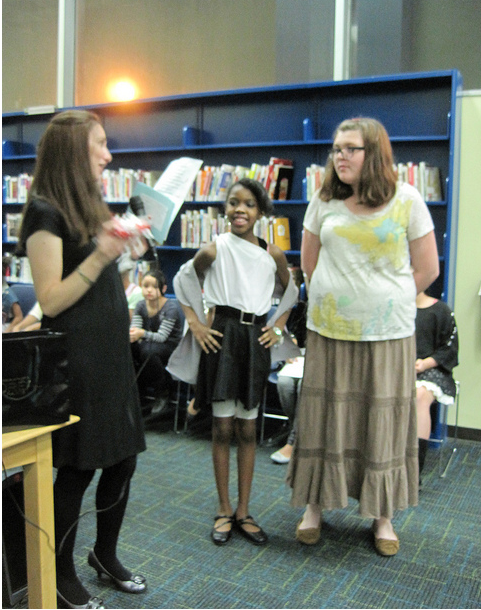 All of the designs were absolutely gorgeous, and the competition was tight. Ultimately, a sleek, minimalist one-shouldered dress took the top prize. The winning designer got a $100 Mood gift card and both designer and model were given tickets to the Project Runway Season 11 finals. Everyone walked away a winner, with all participants receiving a Mood tote bag and a slew of other goodies from the event’s sponsors.

There’s nothing we love more than supporting budding designers and we were thrilled to have been able to co-sponsor Pomonok Project Runway. We can’t wait to see what these designers cook up next!

How about you? Did your interest in sewing and design start early?  We’d love to hear about it!

This is amazing!!! I’m impressed on so many levels. As a mom. A library employee. AND as a seamstress!! What a great idea. Thanks Mood and Project Runway for supporting this project!

We’re pretty bowled over ourselves! It’s so inspiring to see young designers and supportive communities come together.

My mom used to model and make her own clothes (and matching outfits when I came along). My parents divorced after I turned 5 and her machine became lifeless. At the age of 8, I started becoming interested in fashion and designing. At the age of 9, I started making clothes for dolls and venturing in shirts for myself using her machine. When I turned 11, my Dad and stepmom purposely bought a machine for me to use during visits and would take me to a seamstress friend who helped me with techniques. It’s been over 30 years and I still get a rush when designing and sewing! From my senior year wardrobe and dresses for my college friends to creating my wedding dress and clothing for myself, my kids and friends, with sewing, I can be express my best s like an old friend I can turn to when things are good or bad.

That’s amazing. It’s so lovely to see an interest in fashion start so early. I bet your designs are absolutely fantastic. Thanks for stopping by!

Kudos to Librarian Frances Grossman for her creativity, ingenuity, capability and resourcefulness in turning her great idea into an unbelievable experience for the Pomonok teens.

We wholeheartedly second that!

What a fun event! I think it’s wonderful that the sponsors and producers not only gave permission, but joined in the fun. That speaks well of the Project Runway organization.

My mom and grandmother both sewed, and I picked it up from them at a pretty early age. By the time I was 14, I was walking to the local fabric shop to buy material with my allowance and babysitting money. My grandmother and I made my prom dress together on her old foot pedal machine. Those are some good memories, and I picked up some great tips and a bit of Grandma’s can-do spirit from that project.

Your grandmother sounds lovely! Your prom dress must have been an absolute hit.

Sew Your Own Classic Wrap Dress

Get The Look Season 9 Episode 9